The Merchants and Memories Mug Up at Marjorie Mews Library 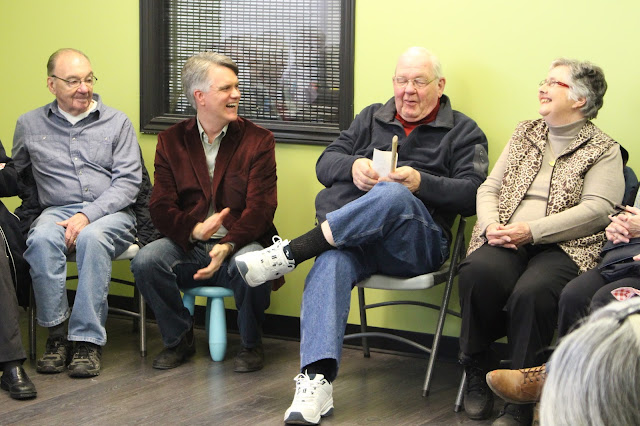 Yesterday, we went to the Marjorie Mews Public Library for our Merchants and Memories Mug Up. As it was our third Mug Up event at the library we decided to have a theme, the Merchants of St. John's. This topic triggered memories and sparked the interest of many people who grew up in St. John's or visited the area. As people arrived at the library, we had to keep adding chairs to the space, widening our circle of chairs to eventually accommodate 56 people. While we were all crowded into the room, the event was a great success and we heard many marvelous stories! In anticipation of the popularity of the event, we decided to implement the use of a talking stick, which was passed around the room in order to give each participant a chance to tell their stories and hold the attention of the crowd. With such a large group, this was a wise choice!

Participants shared stories about shopping in the downtown area of St. John's, both as St. John's residents and people who made trips to town with a specific list of items to buy and places to visit. As well as the main streets of Water and Duckworth, there were memories of the early days of the Avalon Mall, and the taxis and businesses of Brazil Square. People also shared stories of being employees of many of the well known shops and businesses of the area. They talked about their first job experiences, and shared stories about working in the area. One story was told of a bull accidentally being set loose on Water street, and a woman talked about working at the Newfoundland Savings Bank when a hold-up took place.

Many people came with fond memories of family businesses, and insider stories that started with "maybe I shouldn't say this but..." We heard about shops that had been passed down through generations, and the early days of well known businesses like Mary Browns.
Carol Ann Smith talked about her families store, W. R. Goobie Ltd, and brought along a framed advertisement which referred to the store as "Santa's first stop." The ad lists the names and prices for Christmas gifts and decorations that would have been familiar sites in the participants childhood. There were many other stories shared of downtown St. John's which took place at Christmas. Any mention of the Christmas Raffle brought about smiles, and the magic that the window displays in downtown shops brought to families picking up their Christmas gifts. 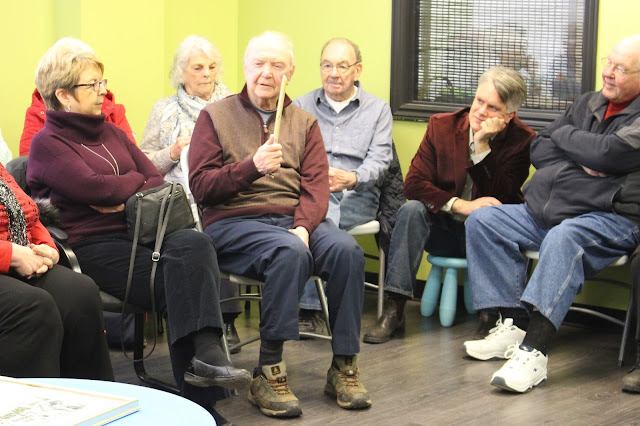 Overall it was a wonderful event and we could have shared more stories well into the night.

Do you have any memories of the important shops when you were growing up? Did you win something at the Christmas raffle? What was your favorite place to eat? Do you remember your first shopping trip downtown?