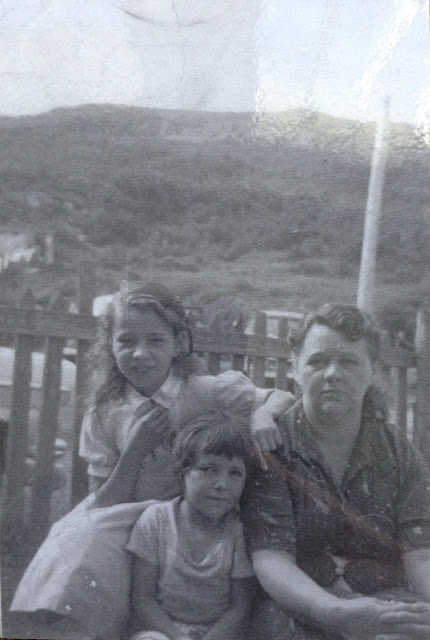 So yes, technically it's Wednesday, but I had to slightly delay the folklore photo this week because of a really exciting meeting I had this morning. I went out to Shea Heights to meet Shirley Holden, who contacted the Folklore office about a tradition she remembers surrounding taking special occasion photos.

Shirley told me this morning that when she was growing up in Shea Heights wells represented a gathering place - kids would hang out on the well and meet up to decide where to play, and workmen would eat sitting on the general store well while waiting for a ride back to work. One really interesting tradition she told me about was taking photos on a well for a special occasion. The photo above is of Shirley (bottom) with her older sister Rita (top left) and her mother Anne (top right) sitting on their family well for a photo, which was taken around 1961.

Shirley remembers always gathering to take photos on the well for anything special: birthdays, Easter, or even Christmas, especially outside of the Vicker's general store window on their well out front of the property. "They put all the decorations and the lights and the little houses [in the window] and so that was your big background; everybody would go and sit on the Vicker's well and get their picture taken ... and it wasn't only us, it was a lot of people that went and sat on the well and got their pictures taken".

Later this week there will be a more detailed recap of some interesting people I have been lucky enough to meet the last couple weeks, including Shirley!

If you have any wells or springs stories to share, please contact me at either Sarah@heritagefoundation.ca or 739-1892 ext. 7
Posted by Sarah Ingram at 11:27 AM