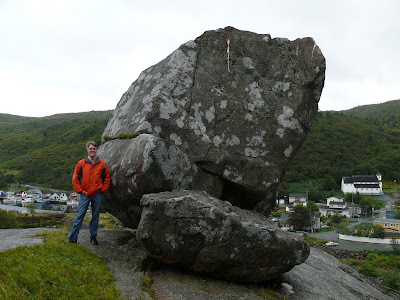 I've been doing a little bit of digging into the folklore surrounding this glacial erratic in Petty Harbour, Newfoundland. Locally, it is known as Indian Rock, Injun Rock, and Engine Rock. Based on a historic photograph in the Centre for Newfoundland Studies, Indian Rock is probably the historic name, with "Injun" and then "Engine" being later reinterpretations of the name.

It is also referred to in a couple places as a logan stone, from an old English or Cornish word meaning to rock back and forth.  The earliest reference to Indian Rock as a logan stone is from William Grey's Sketches of Newfoundland and Labrador, (Ipswich, England: S. H. Cowell, Anastatic Press, 1858). Accompanying a sketch of Petty Harbour, Grey writes,


"On the hill opposite the church is a curious rock, which Druidical antiquaries would call a Logan stone."


This name for the rock was referenced in an article by folklorist Philip Hiscock in 1998 (Downhomer, 11.5 pp 18-19) and then later by popular Newfoundland author Jack Fitzgerald in 2009 (Remarkable Stories of Newfoundland, Creative Publishers, pp 3-5).

I'd love to know anything people remember about this rock, particularly about the origin of the name Indian Rock. If you have a memory or a story, email me at ich@heritagefoundation.ca. 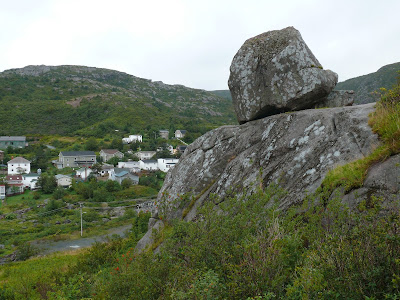 Hi Dale, to my knowledge and from my grandfathers story telling Indian Rock is not an erratic but was part of a rock that broke free from the surrounding hills and came to rest there. Not sure what the composition is but it looks identical to the bedrock of Petty Harbour. It could also have come from the excavating of the tunnel for the power house but I think it dates earlier than that construction. The name came from people travelling to and from Boston and New York who saw similar rocks also named "Indian" on their travels.

Have seen a few photos of Indian Rock from the late 1800s; the Archives at MUN have a copy or two online.