When the wells and springs project first began, I was getting contacted from all over the province, and planning amazing day trips to different communities to be shown sometimes upwards of 10 wells in a day, and chatting with multiple people. Over the last several weeks, I have started reaching out to contacts that are a little more local. Although I live in St. John’s, it has been a little more difficult to find wells, springs, and people to meet that remember a time when you didn’t just turn on a tap. But I’ve made some new friends, with some great stories to share from a little closer to home. 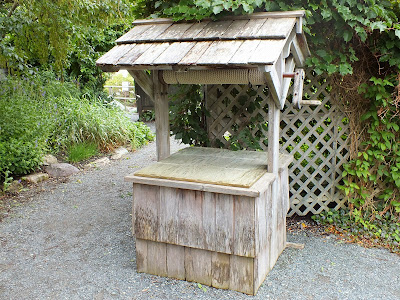 A few weeks ago I made a trek out to the MUN Botanical Gardens, and met with Christine, who showed me around their property. This area of the city has gone through multiple changes over the years, and has hidden within it several wells and springs. The wishing well, closest to the main building, used to service a house owned by Wilt Butler. It was used for water until the pipes were crushed and it became unusable, and after serving as a wishing well for a while it was eventually was covered over due to vandalism. Christine also showed me an open spring along a 200 year-old section of Oxen Pond road originally used for carts that has been integrated into the Botanical Gardens pathways. This spring was across the road from Albert Clarke’s cottage, and he and his wife accessed this spring with a bucket. There are two more wells belonging to cottages now gone on the property that are slightly more hidden from view, and so I plan on going back to the gardens soon to find them.

Last week, I made a short trip out to Portugal Cove St. Philips. I first met up with Michael Murray, who owns and operates Murray’s Gardening Centre on family land. He told me an amazing story about his ancestors, who were some of the first people to settle in the area, and showed me a spring that they found in a hillside and dug out to create a wellhouse. Michael told me he believes the well is from the early 1800’s, and was discovered by his family – and with the few landmarks in the vicinity named after the Murray family, it isn’t hard to believe. It has since been sealed up for safety reasons, and is no longer in use. 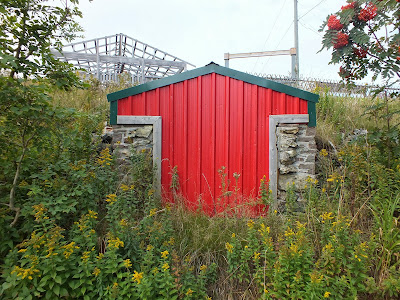 I also went to meet up with Edna and Edgar Spurrell in St. Philip’s. The house they live in is close to a century old, and has always been a part of Edgar’s family – he has lived there since he was born in the late 1930s. Edgar dug the well 40 years ago on his own, about 240 feet away from the house up the hill, and the well itself is about 6 feet deep, which feeds into the house via gravity. Up until last year they have never had a problem with the water, and both Edna and Edgar describe it as being both cold and clear. Unfortunately, some nearby construction seems to have affected the water table that feeds their well, and they have been relying on rainwater and water supplies from Edna’s sister since May. Hopefully the city can provide them with some help, and Edna has promised to keep me updated as to what is going on with them.

Just this past Wednesday I went up to Shea Heights to meet with a wonderfully cheery woman named Shirley Holden. Shirley had a great well tradition to share with me that I had not heard about yet – taking special occasion photos around their well. She even shared a great family photo from 1961 with me, and even though I used it a few days ago for the Tuesday Folklore Photo, I have to share it again. Shirley told me how the well outside of Vicker’s general store was a popular place for Christmas ad Easter picture taking, because they would decorate the front window to fit the holiday, and it made the perfect backdrop for the pictures. You can read a little more about our meeting here. 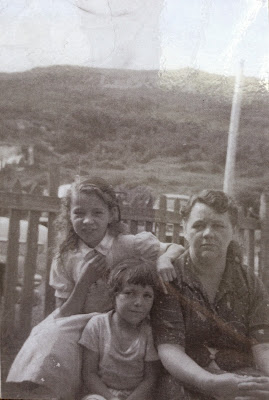 Having more opportunities to do interviews and talk to people has been a great learning and growing experience. For me, it’s a way to understand research and history from a different perspective than I’m used to as an archaeologist; for the project, it’s a way to give meaning and life to the wells and springs we’ve visited; and for the men and women I’ve had the privilege to be able to speak with, it’s a way to make sure their memories and traditions are preserved for future generations to enjoy, remember, and continue.

If you have any stories to share about sharing wells, drinking from springs, or taking photos with wells as the centrepiece, please let us at the Heritage Foundation know! You can email me at sarah@heritagefoundation.ca, or call 739-1892 ext 7.
Posted by Sarah Ingram at 11:20 AM