Newfies, Newfoundlanders and the Politics of Naming 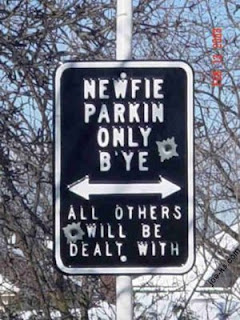 This week's edition of The Scope has an intriguing discussion about the word "Newfie" and what it means in today's society. It includes commentary by people you've probably heard of like author Ray Guy and Kevin Blackmore, aka Buddy Wasisname, as well as by some you may not have heard of, like Mayor Priscilla Corcoran Mooney of Branch, and comic book artist Wallace Ryan.


From the Dictionary of Newfoundland English

1945 Atlantic Guardian Jan, p. 16 Then he found out that the 'Newfies,' as the islanders are sometimes called by one another and by the Americans, refer to supper as 'tea.' 1949 DULEY 11 Now he felt dispossessed, crowded on his own streets, mowed down by the ever-increasing numbers of dun-coloured, army vehicles. The strangers were strutting, becoming the 'big-shots,' They looked down their noses at the natives. They were disdainful of a hard old heritage. They began to call the towns-folk 'the Newfies' and like Queen Victoria, the Newfoundlanders were not amused. 1952 Atlantic Advocate Mar, p. 49 He is a strong advocate of the horse and waggon, home-made bread and 'Newfie screech.' 1976 Daily News 22 Jan, p. 3 Anyone who knows anything might be inclined to the conclusion that [he] is just another stunned Newf. 1978 WHALLEY 4 St John's, a mean ironbound slot for a navigator to find in foul weather or in bad visibility, yet a snug haven for so many ships in the long struggle with the dangers of the North Atlantic and 'the violence of the enemy' that 'Newfy-John's' was a name as much to be conjured with as the Murmansk Run or the Rose Garden. 1977 Evening Telegram 24 Nov, p. 8 The Crowsnest is mentioned often ... as an officers' club where the men spent many happy hours while docked in 'Newfyjohn,' the name [used] to refer to St John's.
Posted by Dale Jarvis at 4:38 PM