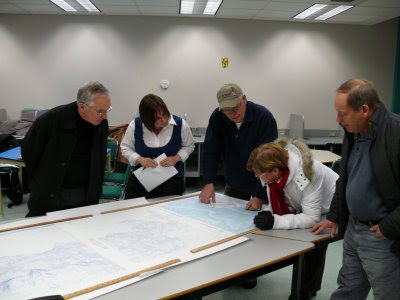 On the evening of Wednesday, March 4th, I was invited to give an address on intangible cultural heritage for the Clarenville Heritage Society’s annual general meeting. I started off with a folktale about names and naming that I had learned from a past resident of the area, and spoke on the folklore of naming and some of the possible origins of the name “Clarenville” itself.

The Society also used the AGM to inform the public about a place name mapping project they are working on. The group has hired on Carol Diamond as a researcher for the project, utilizing funding through the Department of Tourism, Culture and Recreation’s Cultural Economic Development Program. Carol, a Clarenville native, is a Master’s student in Ethnomusicology at Memorial, studying Takudh hymnody of the Gwich’in (an Athapaskan First Nation), focusing specifically on communities in the Yukon.

After the meeting, the group moved from the lecture hall to another room, where we had unfurled maps showing Clarenville and the surrounding area. While some people chatted and shared stories amongst themselves, Carol gathered others around the maps. They pointed out areas they knew, rhymed off names of others, and suggested other residents who might be good sources of local information.