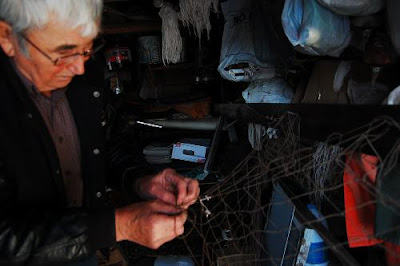 Bonavista's Wilson Hayward has a lifetime of memories

He just recently arrived at his 83rd year. To look at him you wouldn't know it. Although he's still got his reasons to get out and about, life, according to Wilson, is certainly slower than it was.

"I'm not doin' much now; gettin' lazy; readin' books and lyin' around; sittin' down."

He's been a fisherman since he was six years old.

He remembers hearing his father get up at five o'clock in the morning. He'd get up too. His father would ask him, "Where you think you're goin?" Wilson would reply, "Out fishin."

Wilson's father had two men fishing with him back then. On the stern of the boat there was a little room they called the cockpit. That's where Wilson would fit himself.

By the time Wilson was nine and his brother, Bob, was eight, their father let go of the men he had working for him and they took their place.

"We was only boys but we could do the work," Wilson says.

He went as far as grade five as a boy and later returned to night school to get his grade nine. He has no regrets.

"I done me work. Education never bothered me.

Wilson and his brother married two sisters. They were the only two daughters of a boat builder.

It didn't take long before he and his brother began building a boat in their father-in-law's yard, under his guidance.

She was 29 feet long. They had comfort.

They never named the boat but they rode the ocean in her for 17 years.

They'd start fishing in the spring for herring, then for salmon. Come summer it was all about the codfish.

Wilson believes, if the fishery is going to survive into the future, then it has to step back into the past.

"We got to go back to the time when I started fishin'. A boat under 30-feet long with the trawl and the hand-line and allow one trap to a boat. Don't allow the gill nets out there. No draggers."

He and his brother put out their traps in June and by the end of July they'd be out of the water. They'd fish by hand-line and trawl into the fall. By late September they'd be done for the year.

That's when Wilson used to head into the lumber woods.

"I enjoyed it. There was a crowd of people in the bunkroom. Fifty people tellin' stories and singin' all night long, then we'd get up in the morning and go out in the woods."

He wouldn't be home again 'til May. Then, the very next day he'd jump back in the boat.

Since that time he's cut his own wood, kept cows and grown his own vegetables.

Wilson has also found a place behind the ugly stick as a member of The Cape Shore Boys. Over the years they've played a few kitchens.

"We were all in the Odd Fellows (fraternal organization), and every time there was a little party we'd go up and play."

They're still at it today. They do shows at Shirley's Haven retirement home and play at the Ryan Premises twice a week in the summer.

The old ugly stick is worn nearly to the core by now, but still it keeps a beat.

There's another art Wilson Hayward's hands have held onto over the years; the art of weaving nets.

He's leaves his twine at the Ryan's Premises and twice a week in the summer he demonstrates how to knit and mend nets, for the tourists. He brought his talent to an exhibit at The Rooms in St. John's just last year.

Sixty years of fishing. It's not likely he'll forget how it's done.

Wilson Hayward has more stories than a fish has scales.

Some of them have been published in books. Get him started on fairies and he can talk for hours.

"My aunts and uncles used to be always telling the stories of where they used to see the fairies along the marsh in the nighttime in the moonlight, dancin' and playin' and runnin' around.

"I've had some people tell me the experiences they had in the woods and that. When they'd get lost and the fairies used to carry them away. They used to put a handful of raisins in their pockets or turn their pockets inside out so the fairies wouldn't bother them."

"Once a fairy touched a baby it wouldn't grow no more," Wilson says of the legend.

"We had a feller here in Bonavista by the name of Cooper. He was touched by a fairy and he never grew any higher than that (he lifts his hand up to his waist.)

"He was a old man but he never grew no further than that.

He'd be always sittin' on the bench in his house, swinging his legs. He wouldn't go outdoors. He used to be singin' iddly dumpty hiya loopty.

"He was fairy struck," Wilson explains.

"One feller got lost in the woods one time. He was gone four days and they couldn't find him. They had search parties out and they was at it for four days.

"One day he came home. When his mother come he was in the kitchen sitting down alongside the stove.

"People went in and looked at him and they swore that t'was not her son. 'Yes', she said, 'that's my son'. She had to believe it was her son.

"So she went to the next town and she got a midwife to come up and look at the boy and talk with him. She said 'That's not your son; that's not the boy you reared up'."

"By the house there was a pond. So she went out and she got two men who was out by the door. They went in the house and took up the man and throwed him in the pond. He sunk to the bottom. They never seen him no more.

"The next day her son was back. Fairies.

ah - very like the stuff in Barbara Reiti. Good example!