In April, I digitized a set of 35mm slides for the Town of Portugal Cove-St. Philip's. The slides are included in the Allen and Pearl Squires fonds, which contains photographs, WW2 correspondence, and other material that accompanied a monetary donation which funded the community library. The photographs where taken on two separate summer trips, in 1954 and 1962, to visit Allen Squires hometown of St. Philip's and surrounding communities. With Allen's background in the 166th (Newfoundland) Field Regiment Royal Artillery, they took photographs of multiple war memorials around the Avalon Peninsula, including a Memorial Day service in Portugal Cove. The photographs show the large crowd in attendance, the Portugal Cove War Memorial, St. Lawrence Anglican Church, and the surrounding homes and landscape.

One of the images shows the parade heading towards the memorial, and the photographer. Pearl Squires labeled the slide as "Mr. Churchill World War I Veteran in Front,” however the man in the center has been identified by relatives as Archibald Greeley. Two men carry flags at the head of the parade. To the left is the Civil or Pilot Jack and to the right is a Royal British Legion flag.

The Portugal Cove War memorial can be seen in the pictures with many wreaths and the Union Jack flying. Members of the community can be seen sitting on the rocks behind the memorial, and talking to one another. Can you identify anyone in the photographs?

The Beeb and the Big Flag, this Wednesday in Cupids 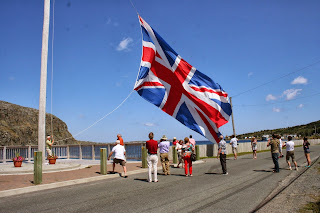 A British Broadcasting Corporation television crew out of Bristol, England will be visiting Cupids where they will be filming "Coast" a program somewhat like "Land and Sea" in this province.

The Union Jack being raised on Wednesday, October 16th, measures 46 feet by 23 feet and is only flown on special occasions in Cupids. It is a a replacement flag for the original flag (billed as the largest Union Jack in the world) first flown from this same site in 1910 on the occasion of the 300th anniversary of the establishment of Cupids as the first English settlement in Canada in 1610. As one can see the flag raising event is a real hands on experience and a great opportunity to take some truly for unique photos - you even get a chance to join fellow flag raisers in singing the anthem during the hoisting of the flag.

Residents of Cupids and the general public are invited to participate in the filming of a communal raising of the large Union Jack. The flag raising will occur at about 9:00am on Wednesday morning.
Posted by Dale Jarvis at 9:10 AM No comments: