#FoodwaysFriday - What is your favourite type of baked bread?

When we discuss foodways of Newfoundland and Labrador the first food that often comes to mind is the codfish. Cod has played a major role in everything from the province’s economy to its culture. It is featured in many traditional dishes however it is not the only food tradition in the province. Seafood and fish, caribou, seal, sea birds, berries, root vegetables, and imported products such as molasses and tin milk all play a part in the province’s food traditions. In celebration of the diverse foods harvested, grown, cooked, and eaten in Newfoundland and Labrador we will be doing a #FoodwaysFriday feature on the ICH Blog.

This week we are featuring a series of photos from a bread making workshop in Conche from 2010. The French Shore Historical Society has an outdoor oven where they bake French style bread. The loaves are served hot, right from the fire, a traditional way of baking bread that very few people practice today. In the spring, 2010, the FSHS held a bread baking workshop for members of the community. From mixing and kneading dough, to monitoring the fire's temperature, every part of the process was explained and demonstrated.

If you want to learn more about French bread baked in Conche, NL click here to view the photos from the workshop!

Share your stories and knowledge of food with the hashtag #FoodwaysFriday.
~Terra Barrett
Posted by Terra Barrett at 8:25 AM No comments:

#FoodwaysFriday - Breadboxes: Are they useful or do they just collect crumbs? 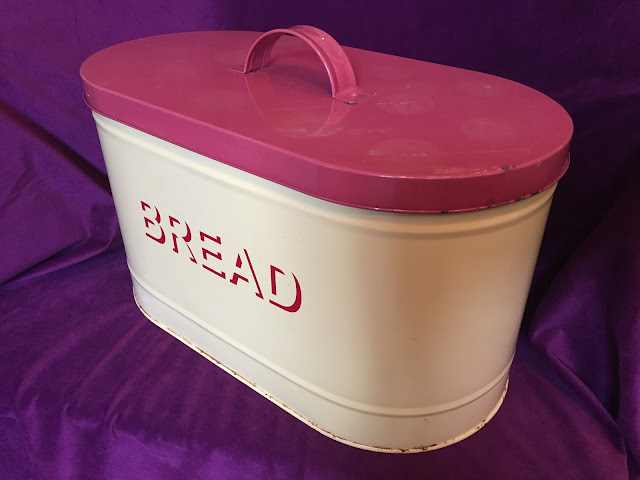 I'm moving into a new spot and I recently came across this breadbox on an online antique buy and sell page and purchased it because I loved the colours. I grew up with a breadbox but haven't seen one in some time so I wanted to ask our followers are breadboxes useful today? Do they keep your bread fresh?

Breadboxes or bread bins store bread and other baked goods to keep them fresh. They can be made of wood, pottery, or metal. Breadboxes aim to keep bread at room temperature, let the bread "breathe" to prevent mold, and protect against pests.

There is also a bit of folklore about the breadbox and you may have heard the expression "Is it bigger than a breadbox?". This expression is thought to have originated with Steve Allen on the game show What's My Line on January 18, 1953. You can see a clip of the show where Steve Allen first compared a product to the size of the breadbox.

So let us know - are breadboxes useful? Or do they just collect crumbs?