As part of the Collective Memories project the ICH office is showcasing community material which has been placed on Memorial University's Digital Archives Initiative. Check out this interview from May 17, 2010, Lisa Wilson interviews Gertrude Hunt of Conche, Newfoundland. Gertrude discusses knitting, life in Conche, her family, making quilts, working in the Conche fish plant, working in Alberta, and social change in Conche.

The ICH office is helping communities place previously recorded materials online. If your community has material you would like to make publicly accessible reach out to the Heritage Foundation at 1-888-739-1892 ex.2 or ich@heritagefoundation.ca

#FoodwaysFriday - What is your favourite type of baked bread?

When we discuss foodways of Newfoundland and Labrador the first food that often comes to mind is the codfish. Cod has played a major role in everything from the province’s economy to its culture. It is featured in many traditional dishes however it is not the only food tradition in the province. Seafood and fish, caribou, seal, sea birds, berries, root vegetables, and imported products such as molasses and tin milk all play a part in the province’s food traditions. In celebration of the diverse foods harvested, grown, cooked, and eaten in Newfoundland and Labrador we will be doing a #FoodwaysFriday feature on the ICH Blog.

This week we are featuring a series of photos from a bread making workshop in Conche from 2010. The French Shore Historical Society has an outdoor oven where they bake French style bread. The loaves are served hot, right from the fire, a traditional way of baking bread that very few people practice today. In the spring, 2010, the FSHS held a bread baking workshop for members of the community. From mixing and kneading dough, to monitoring the fire's temperature, every part of the process was explained and demonstrated.

If you want to learn more about French bread baked in Conche, NL click here to view the photos from the workshop!

Share your stories and knowledge of food with the hashtag #FoodwaysFriday.
~Terra Barrett
Posted by Terra Barrett at 8:25 AM No comments:

The Flying Cloud - a recitation by Patrick O'Neill, Conche 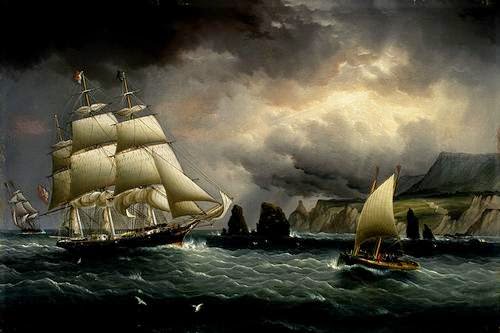 The Clipper Ship "Flying Cloud" off the Needles, Isle of Wight, by James E. Buttersworth, 1859-60.
Source: Wikimedia Commons.
While they share the same name, this is a different vessel from the one in the recitation below.

In June of 2000, I was in the community of Conche on Newfoundland's Great Northern Peninsula, doing work on heritage buildings for the Heritage Foundation of NL. I had the luck to meet Mr. Patrick "Uncle Paddy" O'Neill. He was introduced to me by his niece, Joan Woodrow, and while we were talking, he started to do a recitation of an old ballad called "The Flying Cloud", which he had learned from a man named Pat Bromley around 1941.

Using spare tape and an old tape player Mr. O'Neill had, I made a very rough recording of the traditional ballad, which I've transcribed below.  Uncle Paddy is no longer with us, but his version of the lyrics live on! I've seen it described as an anti-piracy ballad. If you have comments, leave them below, or email me at ich@heritagefoundation.ca.

as remembered by Patrick O'Neill, Conche
June 2000
recorded and transcribed by Dale Jarvis

My name is Edward Anderson,
As you might understand,
I belong to the county Waterford
In Ireland’s heavenly land.

My parents raised me tenderly,
And taught me to be wise.
'Twas little they thought I’d die in scorn
In Cuba's sunny skies.

I served my master faithfully
For eighteen months or more,
Then took a voyage on the Ocean Queen,
To Valparaiso's shore.

It happened in Valparaiso,
I met with Captain Moore,
Commander of the clipper Flying Cloud,
Sailing out of Baltimore;

He asked me for to join him
On a slaving trip to go,
To the western shores of Africa
Where the sugar cane do grow.

The Flying Cloud was a clipper barque,
Five hundred tons or more,
Could easily sail with any ship,
Sailing out of Baltimore.

Her sails were white as the driven snow,
And on them showed no speck,
Seventy-five brass cannon guns
Were mounted on her deck.

Her medicine chest and magazine
Were stored away below,
And a Long Tom between her spars,
On a swivel used to go.

I often saw that clipper barque
With the wind abaft the beam,
---------- set,
Take sixteen from the reel.

After three weeks sailing
We arrived on Africa’s shore
Fifteen hundred of those slaves
From their native land we bore.

We forced those slaves to walk our deck
And stowed them down below,
With eighteen inches to each one
Was all allowed to go.

Your heart would ache all for their sake
You could see those slaves
Better far for those poor souls,
If they were in their graves.

The plague and fever came on board,
Swept half of them away,
We dragged their bodies out on deck
And threw them in the sea.

Another three weeks sailing
We arrived on Cuba’s shore.-
We sold them to a planter,
To be slaves forevermore;

The rice and coffee fields to hoe
Beneath the burning sun,
To wear away their wretched lives
Till their sad career was run.

And when our money was all spent,
We came on board again,
Captain Moore from his cabin came
And spoke to all his men:

"There's gold and plenty to be had
If you come with me again,
We’ll run the pirate flag aloft,
And scour the Spanish Main.

We have the fastest sailing ship
As ever skimmed the seas,
Or ever set her eye for a course
Before a lively breeze.”

We all agreed except five men;
He told those five to land:
Two of them were Boston boys
Two more from Newfoundland;

The other was an Irish chap
Belonging to Tramore,
I wish to God I’d joined those men
And went with them on shore.

We robbed and plundered many a ship
Down on the Spanish Main,
Caused many a widow and orphan
In sorrow to complain.

We forced their crews to walk a plank
That hung out over the rail,
The saying of our captain was,
The dead man tells no tales.

We were often chased by man-o'-wars
Both east, north, west, and south
But none of them, try how they would
Could catch the Flying Cloud.

We were often chased by man-o'-war
Who would try to round us to,
To overhaul the Flying Cloud
Was more than they could do.

Until a British man-o’-war
A frigate hove in view
He fired a shot across our bow
A signal to heave-to.

We faced our yards and crowded sail
And ran before the line
A chain-shot struck our mizzen mast
And soon we fell behind.

The deck was cleared for action
As she raced up alongside,
And soon across our snow-white deck,
There flowed a crimson tide.

We fought till Captain Moore was killed
And thirty of our men,
A bombshell struck our ship afire,
We had to surrender then.

The rest of us were brought to land
And into prison cast.
Tried and were found guilty,
To be hung at last.

And the girl that I loved dear,
No more will I kiss her ruby lips,
Her sweet voice no more will hear.

Farewell my aged parents,
I now must meet my doom.
I’ll swing aloft the yardarm high
Cut in my youth and bloom.
Posted by Dale Jarvis at 12:20 PM 1 comment: