Do you have memories of growing up in St. John's? Have you heard stories of the longshoremen of the southside?

Join us this Sunday, July 14, at the community room in the St. John's Farmer's Market for a discussion with Helen Fogwill Porter. Folklorist, Dale Jarvis, will led the discussion with Porter, a local writer, and activist on growing up on the Southside Road in St. Johns, Newfoundland, during the 1930s and 1940s.

Southside Memories is a free and informal story sharing session, where people gather, have a cup of tea, and share memories. Bring a memory from growing up, or come out to listen to Helen's stories of the Southside of St. John's.

Her first novel January, February, June or July won the Young Adult Canadian Book Award from the Canadian Library Association in 1989. She was given the Newfoundland and Labrador Arts Council's lifetime achievement award in 1993. Memorial University of Newfoundland granted her an Honorary Doctorate of Letters in 1997. She was awarded the Order of Canada in December 2015, and the same year a footbridge spanning the Waterford River was dedicated to her.

Porter is a member of the Writers' Union of Canada, and served on the boards of PEN Canada and the Writers Alliance of Newfoundland and Labrador. Porter was also a founding member of the Newfoundland Writer's Guild. Porter taught creative writing with Memorial University Extension Arts and worked with the Visiting Artists' Program of the Newfoundland Teachers' Association. Porter was heavily involved in the women's movement in the early 1970s. She was also a founding member of the Newfoundland Status of Women Council and ran for election to the Canadian Parliament as a New Democratic Party representative four times. In 2003 The Helen Porter Fund was established to help women NDP candidates.
Posted by Terra Barrett at 8:45 AM No comments:

Launching the Seniors Memory Mug Up at the Market! 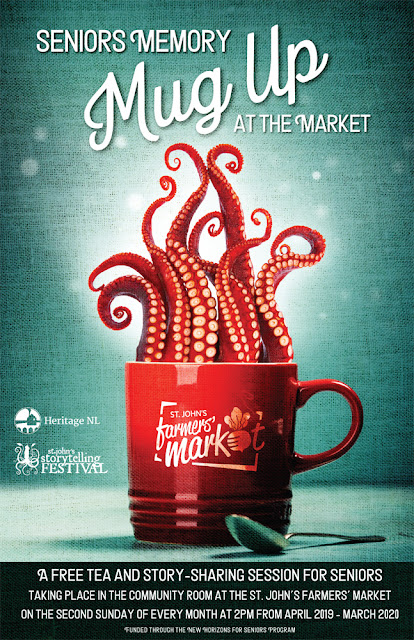 What are your fondest childhood memories? Which local shop did you frequent? Do you remember the best hill for sliding? Heritage NL, in partnership with the St. John’s Farmers’ Market and the St. John’s Storytelling Festival, wants to know!

Heritage NL will be hosting the Mug Ups at the Community Room at the St. John’s Farmers’ Market the second Sunday of each month, from April 2019-March 2020 at 2pm, starting April 14th.

The Seniors Memory Mug Up at The Market is an informal story sharing session for seniors, where people gather, have a cup of tea, and share memories. The goal of the Mug Up is to help seniors share and preserve their stories. Whatever story is important to them, whether it a personal story, a story about a family member, or a story about the community, the Memory Mug Up program can help preserve and share it.

The events are free! Seniors bring a memory of growing up, organizers in partnership with vendors at the St. John’s Farmers’ Market supply the tea and local food, and everyone has a chat. Seniors will set the themes for each monthly storytelling session, and volunteer to act as hosts and moderators each month. Following the sessions, those who are interested can set up a time to have their stories recorded and archived by one of our story collectors. These stories will be edited into a booklet, which will be launched during the final storytelling session in March 2020.

Come for a cup of tea, a bite to eat, and share a memory or two! If you have any photos bring them along on Sunday, May 12th.

For more information please contact Terra Barrett with the Heritage NL toll free at 1-888-739-1892 ext. 5 or email terra.hfnl@gmail.com.
Posted by Terra Barrett at 8:30 AM No comments: