On Wednesday evening after a day of completing tape logs and metadata descriptions at the office I flew to Toronto and then on to Quebec City for the conference where a number of folklorists and heritage professionals were meeting and presenting papers on their work. Thursday was focused on Intangible Cultural Heritage (ICH) and there were presenters from across the country and beyond. There was a lot of discussion on UNESCO's 2003 Intangible Cultural Heritage Convention and what has happened in the ten years since the conference was ratified in 2006. Presenters from Belgium, Denmark and Norway described how their countries were working on ICH since ratifying the convention while presenters from Scotland, and Canada discussed their interest in ratifying the convention and moving forward with preserving ICH in their countries. Dale gave a presentation on the work of the Intangible Cultural Heritage Office since 2008 and focused on the Grey Sock project as an example of the work from the Heritage Foundation which celebrates, records, disseminates, and promotes ICH or the living heritage of the province.
Friday, Saturday, and Sunday there were presentations from folklorists, ethnomusicologists, anthologists, and many other heritage professionals. Some presentations focused on what their institutions were working on while others presented a paper or specific concept or concern in heritage. On Saturday morning I presented a paper I had written on the Mummers Festival. It was called “Shagging with the Tradition: The St. John’s Mummers Festival” and looked at how the Mummers Festival has used Intangible Cultural Heritage to create community and increase tourism. It also traced mummering as a cultural symbol for the province since the 1960s until today.
It was a beautiful weekend in Quebec City which finished with a declaration of interest in ICH in Canada and a wish for the country to ratify UNESCO’s convention on Intangible Cultural Heritage in order to preserve and promote the ICH of the country as a whole.
~Terra Barrett
Posted by Terra Barrett at 11:00 AM No comments: 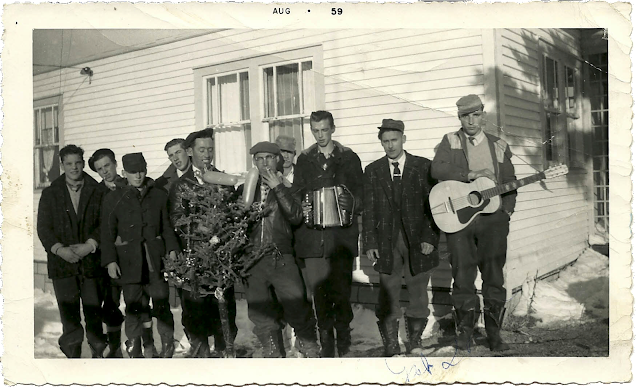 Hosted by the Folklore Studies Association of Canada, the Institute for Cultural Heritage of Laval University (IPAC) and the Centre for Culture, Art and Society (CELAT)


Interest in intangible cultural heritage (ICH) has been growing rapidly in Canada, in the United States, the United Kingdom, France, Germany, Belgium, Japan, China and in many other countries in the world over the past years, especially since the adoption of the Convention for the Safeguarding of Intangible Cultural Heritage in 2003 at UNESCO. Now signed by more than 160 countries, the Convention has given intangible cultural heritage recognition worldwide. By defining ICH as creative living traditions, UNESCO has also been able to redefine heritage as an open ongoing process shaped by people and changed through encounters, rather than an immutable entity anchored in tangible things. This shift has opened new and exciting perspectives for understanding the intertwined legacies of heritage, the complex intergenerational and intercultural transmission of living traditions, and the creation of different transcultural inheritances. It leaves room for the accommodation of the new and the transgressive alongside the traditional.

This conference aims to focus on the uses of ICH and to view it as a transformative and transgressive practice. The making of intangible heritage, or the “heritagization” of living traditions transforms them into a performance, a festival or a sporting competition, as these traditions are moved out of the community and into a heritage site or event, a museum or an archive. Even when intangible heritage stays within the community, traditions are always transformed in one way or another. Participants are invited to reflect upon how these processes affect cultural practices and the people involved. Generally, heritage is considered a transformative experience aimed at making the participants better people and the world a better place, sometimes even expressed as a sort of conversion, a ritual of transcendence, that reinforces the group and enhances its participation in contemporary cultural politics. But, more often than not, one person’s inheritance is the disinheritance of another. Indeed, the ethics of heritage often conceal more than they reveal. For example, the current aesthetization and heritigization of native ritual performances in museums has helped to valorize Amerindian, Inuit and African religious expressions as forms of art, long considered primitive, but, at the same time, it has done away with the colonial context and with history altogether. To avoid such shortcomings, many cultural institutions have devised a “ground up” or “bottom up” model of heritage management, which aims to recognize, preserve and promote the cultural heritage most highly valued by the communities themselves. This approach has also been encouraged by UNESCO as well as many of the state parties of the Convention. Although a new and noble approach, it does not always help determine what should be valorized and why, nor whom in the community should be permitted to decide what should be recognized. Local communities too have their hierarchies, their hidden agendas, and their own problems with gender, class and race. In other words, policies need to be explored alongside process and practice to fully understand the politics of intangible cultural heritage at all levels.

The emphasis on non-material knowledge and forms of communication in intangible cultural heritage can be related to a developing interest in the role of performance as a form of social memory, to the expansion of curatorial interest in ‘experiential’ displays and to the valorization of what has, more broadly, been termed the ‘experience economy’ in contemporary society. The recent interest in intangible cultural heritage, in other words, might usefully be situated in the context of what has been called ‘the cultural turn’. To shed new light on this broader topic, we encourage participants to focus on how the case of intangible cultural heritage throws two particular issues into stark relief : first, heated contemporary debates over the desirability of academics engaging with the administration of culture - over whether engaging with policy is an abdication of political possibility – and second, the boundaries and limits of cultural policy, or what it is possible to administer. Positioning themselves against a narrowly technocratic approach, the participants are invited to interrogate the cultural heritage of intangible cultural heritage itself. By doing so, we will be better equipped to consider the capacious, imaginative interactions between theory, policy, process and practice.

Although all proposals regarding this topic will be considered for inclusion in the conference program, participants are encouraged to submit paper proposals on the following themes:

Individual paper and/or session proposals should be sent by email to Laurier Turgeon (Laurier.Turgeon@hst.ulaval.ca) before October 29th(midnight) by providing the following information: name and surname, institutional affiliation (university, museum, ministry, municipal administration, etc.), acquired degrees (PhD, MA, year of degree, name of the university which delivered the degree), current position (postdoctoral fellows, PhD and MA students should indicate their status and affiliation), recent publications (up to 5 or 6 related to the theme of the conference), and a paper abstract (700 to 1000 characters including spaces). The proposals received by the 29th of October will be eligible to funding for travel.