As part of the Collective Memories project the Heritage Foundation of Newfoundland and Labrador is helping community organizations, municipalities, and church groups digitize their oral history collections to make them accessible for future generations. Collected stories are made available through Memorial University’s Digital Archives Initiative, which is a free, public website where the HFNL stores the photos, videos, and interviews it collects. If you have something to be digitized - get in touch!

One of the collections we have digitized is the Pasadena collection which consists of thirty eight audio interviews with full transcripts.  These interviews were completed by the Pasadena Heritage Society from July 2014 to August 2016 and they focus on the growth  and changes of the community. They discuss the development of groups such as Girl Guides, Lion's and Leo Club, Glee Club, and Army Cadets, the local library and fire department, how the holidays were celebrated and community events such as the strawberry festival and winter carnival.

Click here to learn more about the community of Pasadena!

Posted by Terra Barrett at 8:30 AM No comments:

Workshops and Interviews on the West Coast

Dale and I are out on the west coast of the province as part of the Collective Memories Project. Tuesday afternoon after a breakfast with folklorists Crystal Braye and Sandra Wheeler we headed to Reidville in the Humber Valley. We met with another folklorist Amanda-Marie Hillyard who is from the community and set up an interview with Clifford Reid, a local history buff and a descendant of the original Reid’s of Reidville. Following the interview Clifford took us on a tour of the town pointing out how the land was originally parceled out, the location of the old tram system, and where people would the leave the community to paddle their canoes to Deer Lake.
Clifford described how the community was settled by his grandfather and his uncles in the 1930s following one uncle’s move to Junction’s Brook across the river from the land that became Reidville. Clifford’s uncles and his grandfather moved to the area in order to work as loggers and farmers. The main work in the area was at the lumber camps feeding logs into the river system bound for the mill in Corner Brook. Clifford described the 20 mile tramway system which ran from Reidville to the lumber camps near Adie’s Lake (locally spelled Aides and pronounced Eddys) where the Humber River starts. This tramway was built by Bowater in order to bring supplies to the logging camps.
Clifford also added his own memories of growing up in the community such as the best spots for swimming and trouting, going to school in the small community, and riding the horses that ran wild in the community in the summers. He also mentioned that with no church or graveyard no one died the community! Listen to the clip below to hear a story Clifford told about some mystery snoring heard by his uncle and friends at a woods camp in the winter.

In the evening we headed to Pasadena for a People, Places, and Traditions workshop where there were over 30 people in attendance. We had the group separate into smaller groups and cluster around three tables. One focused on people, one on places, and one on traditions. Each group wrote their thoughts and memories on index cards which they then placed on large maps of the community. They connected their index cards with a ribbon to the location where the people discussed live/lived, the important places in the community, and where traditions took place.
There were business owners, principles, farmers, crafters, heritage society members, and active church members were placed on the map while parks, community centres, and the concrete rock were mapped out. The concrete bottom is where locals would go swimming and it got its name for a rock on the bottom of the pond which is flat almost like poured concrete. There were traditions such as heading to the dump to watch the bears play, trapping rabbits, and taking part in festivals such as the winter carnival, the strawberry festival, and the Santa Claus parade.
After the mapping a couple of community members shared stories and memories stirred up by the session and one gentleman told of how his mother and him were planting potatoes in the field where the community centre now lies and she gave him her wedding ring to wear while she planted. He put the ring on, watered the potatoes and when they finished planting the garden went for a swim at concrete rock. He came home after swimming only to find he had lost the ring. His mother told him to tell all the boys who went trouting if they came across a ring in the belly of a fish it was her wedding band. Unfortunately to this day the ring is still missing. If you ever come across a ring while trouting in the area be sure to call the local heritage society to ask about this story!
~Terra Barrett
Posted by Terra Barrett at 12:28 PM No comments: 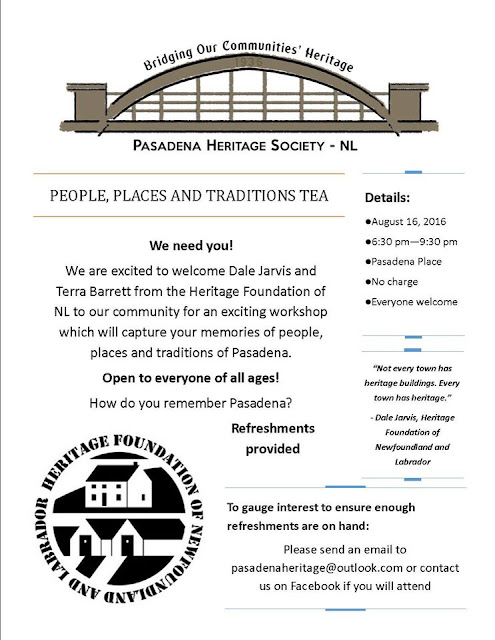 Dale and I are out on the West Coast this week doing some interviews, workshops, and meetings in Corner Brook, Pasadena, Reidville, and Deer Lake.  We are hosting a couple of People, Places and Traditions Workshops and invite everyone in the area to come out and talk about your community.

Tonight we will be in Pasadena from 6:30-9:30pm at Pasadena Hall and tomorrow afternoon we will be in Reidville in the Community Hall from 1:30-4:30pm. Drop by, have a cup of tea, and share some memories of your community! 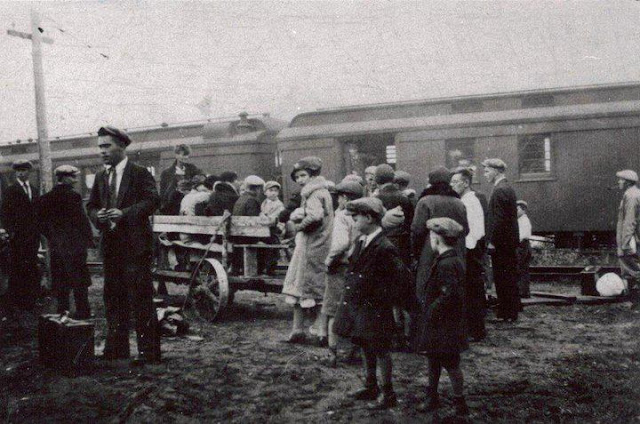 We are very pleased to announce that a new collection of oral history interviews is up online!

As part of our Collective Memories project, the Heritage Foundation NL, in partnership with the Pasadena Heritage Society - NL, has just placed a collection of oral history interviews (audio and pdf transcripts) online with Memorial University's Digital Archives Initiative.

The collection contains interviews with locals on their childhood memories, local businesses, the fire hall, entertainment, social clubs, railway stories and more. Thanks to Carole Spicer for her work in getting things organized, and to Michelle Tapp for organizing the collection and doing up all the metadata!

The oral histories from Pasadena will eventually be part of a larger collection of oral history material from the Humber Valley region.  You can browse the collection here. 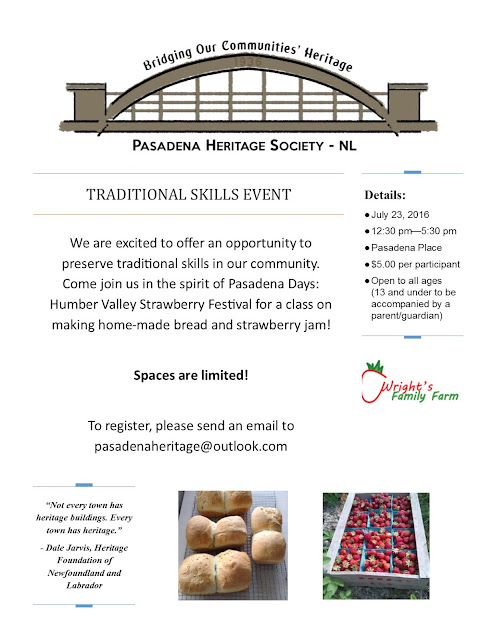 Strawberry jam, fresh made bread, and heritage: a perfect combination!

Our friends at the Pasadena Heritage Society are starting up a series of traditional skills workshops, and their first one is happening on July 23rd, as part of the the Humber Valley Strawberry Festival.

You'll learn how to make bread and strawberry jam from scratch! The workshop is only $5 and is open to all ages. For more information, and to register, contact pasadenaheritage@outlook.com