As part of the Collective Memories project the ICH office is showcasing community material which has been placed on Memorial University's Digital Archives Initiative. This interview with Joseph "June" Fitzgerald of Keels was conducted by Kristin Catherwood as part of the 2012 Folklore Field School. In the interview Joseph "June" discusses gardening in Keels, past and present. This includes reasons for gardening; garden locations; vegetables grown; necessity of gardening; enjoyment of gardening; gardening as a hobby; fertilization of gardens; soil preparation; cultivation methods; garden pests; and the gardening season. If you want to learn more about gardening click here.

#Folklorephoto How Do You Catch Your Luck? Horseshoe on a Stable Door in Keels 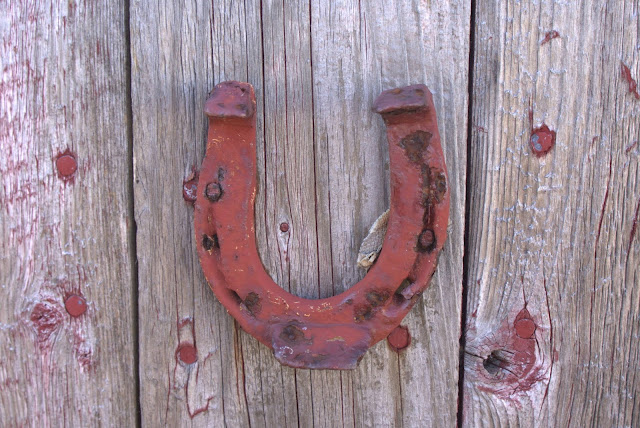 A horseshoe is hung on Kenneth Mesh's stable door in Keels as a good luck charm. Photograph was taken by Claire McDougall in 2012 as part of the MUN Department of Folklore field school.

To see other material from Keels visit MUN Digital Archives Initiative.
Posted by Kelly Drover at 8:50 AM No comments: 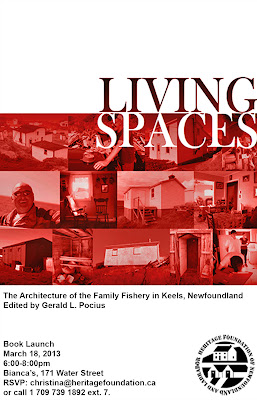 Most new students spend their first weeks of school in stuffy classrooms. But in a new program through the Department of Folklore at Memorial University, new graduate students spent their first days exploring a small Bonavista Bay fishing community. During the last three weeks of September 2012, the Department of Folklore introduced a new course for incoming graduate students on cultural documentation techniques.

“I decided that I would focus on the community of Keels in Bonavista Bay,” says course organizer Dr. Gerald Pocius. “Unlike previous field courses, this one would actually take place outside the classroom, with students living away from their usual environments, focusing on a place and people different to most of them.”

Timed to coincide with this year’s 20th anniversary of the cod moratorium, the field school examined how outmigration and gentrification affected the traditional cultural landscape of the Bonavista region, focusing on the last two inshore fishing families in the community of Keels. Students lived in the town, and worked to document buildings, including homes, fisheries buildings and root cellars. Along the way they interacted with and interviewed locals about their lives and work. The results of the field school, including architectural drawings and descriptions of some of the spaces studied have been put together in a booklet, “Living Spaces: The Architecture of the Family Fishery in Keels, Newfoundland,” edited by Pocius.

“Both the field school and the booklet have been a cooperative project between Memorial University and the Heritage Foundation of Newfoundland and Labrador,” says Dale Jarvis, folklorist with the foundation. “These types of partnerships are a great way to help students develop real-world skills, and to demonstrate to communities the type of research that is going on within the university. It also helps us with the foundation’s mandate of promoting and preserving the important architectural and intangible cultural heritage of this province.”

The booklet will be launched at a public event at 6pm, March 18th, 2013 at Bianca’s, 171 Water Street, St. John’s. The event is open to the public, though people are asked to RSVP with Christina Robarts at 739-1892 ext 7, or by email at christina@heritagefoundation.ca

Posted by Dale Jarvis at 9:52 AM No comments: