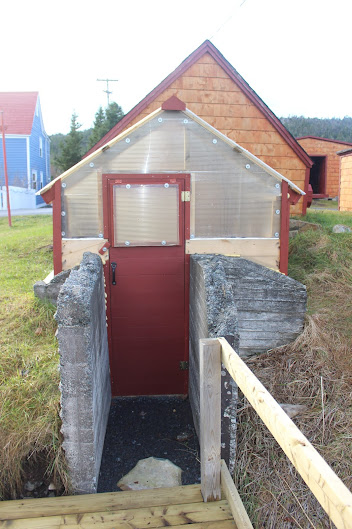 Uncle Jesse’s cellar is a root cellar built into the size of a hill in Whiteway sometime in the 1930s, located just behind the Burgess Designated Heritage Property’s Cellar. In typical cellar fashion, it is not a very big building, but it is unique in the way that it is only partially underground.

Like all root cellars across Newfoundland Uncle Jesse’s cellar would have been built to store vegetables over the winter. Unlike other root cellars, however, Uncle Jesse’s cellar was reused by the Burgess family over the years for a variety of reasons, and even featured some built in benches and furniture at one point. Ian Burgess recalls, for example, that Uncle Jesse would nap or lay down in his cellar during the summer months because:

‘He had some kind of consumption or issue with his lungs and found it difficult to breath so uh, on-uh, on-uh muggy summer days they-they had uh, y’know the uh-th’ fainting couch? Th-the the one with the rounded back? uh, uh, the s- the settee I guess you’d call it? Uh he had one of those put out there and he would go out there and uh, an get some relief on-uh, on warm days.’

Bob Burgess recalls this as well, saying that his Uncle Jesse had severe emphysema, and may have even lost a lung to his illness at one point. Bob also informed us that, because of its second use as a resting place for Uncle Jesse, the cellar was actually quite cabin-like in his youth, around the 1970s.

More generally, Uncle Jesse and his wife were known around the community for always having a household full of young people. While they did not have any biological children themselves, the couple took in a few kids over the years who lived with them for a period of time. Bob Burgess recalls that there was always a ‘jeer’ of kids around his Aunt and Uncle’s house. He told us, more specifically:

Both Bob and Ian Burgess also recall that there was a musical component to their time in Whiteway with their Uncle and his kids. Bob recalls that they were often singing and playing guitar, and Ian told us:

Today, the cellar, along with the rest of the Burgess Heritage Property, are still owned by members of the Burgess family. Uncle Jesse’s cellar, unfortunately, fell into disrepair after years of neglect, but has recently been renovated into a greenhouse, bringing it into a new phase of existence. While Uncle Jesse’s cellar is not a designated building, the stories attached to it are compelling and help illustrate to ways in which buildings evolve and are adapted or refit to suit the needs of the people who use them.