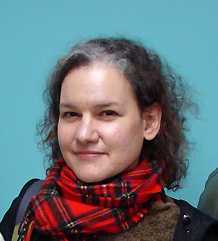 Janet Peter has been working with the Craft Council of Newfoundland and Labrador for approximately 20 years. She possesses a great interest in creating paper maché mummers and figurines of local traditions and folklore, and these themes recur in much of her work. She has been making marks on paper since she was old enough to hold a pencil and it motivated her to embark on a journey to a career in the arts.

After high school, Janet briefly studied animation. Shortly after graduating with a Visual Arts diploma, she began a line of paper maché mummer figurines. She earned a Masters’ in Political Science; worked as a workers’ advocate; then moved across the country to St. John’s to start her career afresh. Currently, she is working on a series of needle felted sculptures depicting pre-Victorian yuletide folklore and practices for an upcoming solo exhibit.

Janet Peter is one of those who have been constantly working to keep the craft tradition of Newfoundland alive. In this episode, Janet talks with Nadia Sarwar about her upcoming solo exhibition, her notable creations, the activities of the Craft Council, and the future of craft in Newfoundland. This episode is part of a series of programs in partnership with the Memorial University graduate course Folk 6740 - Public Folklore, and the Craft Council of NL, to document craft traditions in the province of Newfoundland and Labrador.