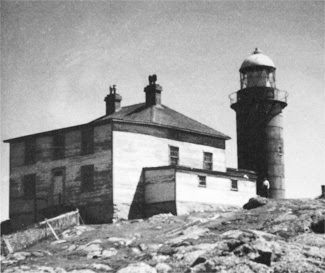 Baccalieu Island is an uninhabited island located in northern Conception Bay near Red Head Cove. Construction began on the Baccalieu Island lighthouse and dwelling in July of 1858. It was first established as a fog station in 1905, and the light tower was later added in 1953. The tower was composed of red bricks and stood at twenty-five-feet tall. The dwelling was painted white with a red roof.

James Ryan was the first lighthouse keeper appointed to the Baccalieu Island Lighthouse in 1858, and four generations of Ryans manned the lighthouse for the next ninety years. The telegram reported the following about the Ryans upon their retirement:

“They were well and favourably known by all mariners and fishermen in the sea lanes, they were the friends of all who needed them and were ready at all times to risk their lives to save others. Because of their isolation they loved not man less, but nature more, they always felt close to God and they were God fearing people.”


When there was talk of demolishing the lighthouse, locals protested by writing a letter:

“Demolishing the stone lighthouse would be destroying a part of our culture, that could never be replaced. It would be tantamount to ‘blowing up’ a medieval castle in Europe, an act so outrageous that it would immediately have word wide attention.”

Today, the lighthouse is not manned by a living person, however, a bright white light still flashes every ten seconds, warning nearby boats of impending danger and serving as a reminder of Newfoundland's rich fishing history.