On July 12, I interviewed Ed Murphy about the W.J. Murphy store in St. John’s, which operated from 1895-2000 on Rawlin’s Cross (in the space now occupied by Hungry Heart Café). As the third-generation owner and operator of the store, Ed had a wealth of stories to share about the history and legacy of the business. Over the years, W.J. Murphy’s sold many local products, including rabbit, moose, salmon, halibut, fish (cod), partridgeberries, blueberries, bakeapples and locally grown vegetables. The store also imported a few fancy items from England, Scotland and Ireland. In the early days, the store delivered their wares using bicycles and horse and cart, before making the obligatory shift towards car deliveries. Many customers entrusted W.J. Murphy’s with keys to their homes, even in the years leading up to the business’s close. As Ed explained it:

"Like I said, it was family. And we used to go around delivering, and we had keys to their houses, and if the driver went there and they weren’t home, we just opened the doors and went in. If there was ice cream or anything frozen, we’d put that in the fridge, leave the rest of the stuff there and go on. It was just a different atmosphere altogether, you know.”

After our interview, Ed showed me several intriguing artefacts that he’s held onto over the years: 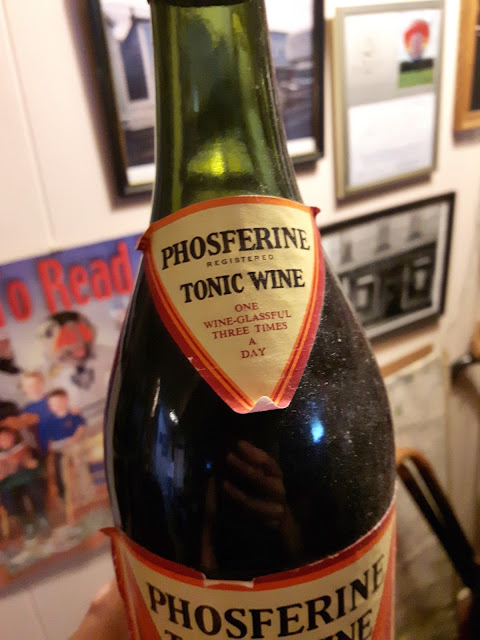 This is a bottle of pre-confederate tonic wine, which Ed estimates as being “80, 90 years old now, it’s got to be.” Before confederation, W.J. Murphy’s was permitted to sell wine, but the Canadians opted to outlaw such practices “because the liquor store took over.” As Ed remembers it, “The liquor store went around to all the stores and collected these bottles of wine and liquor that weren’t already sold, but Dad said to himself, ‘They’re not getting that liquor.’ So we took all the cases.” Ed drinks the tonic wine very sporadically, and has kept many bottles since that time. He opened up a bottle on his 60th birthday, thinking it might taste like vinegar, but instead found that “Harvey’s Bristol Cream has nothing on it. A little shot of it like that, and you can feel the blood in your body starting to curl.” 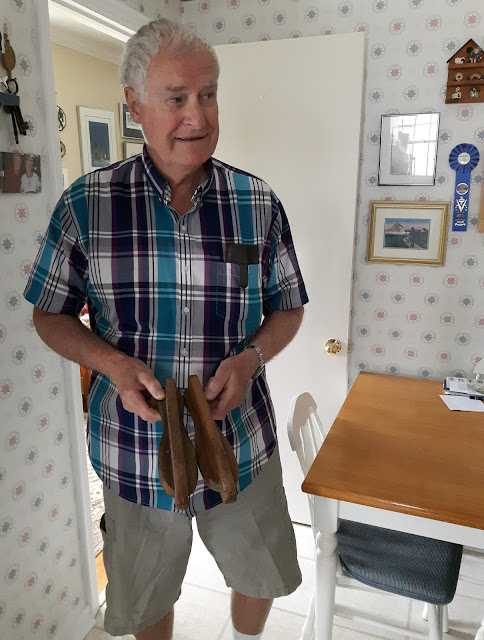 Here, Ed is holding a pair of wooden skates that his grandmother used to skate across the St. John’s harbour. At first, I registered this fact with some astonishment—could people have truly skated across the Narrows?—but Ed appeared unswervingly confident:

Ed: And I’m going to show you now a pair of wooden skates that my grandmother used to skate on the harbour. And you might say this, “Now, how can you use a pair of wooden skates on the harbour?” It was homemade, they were homemade here in Newfoundland, and she’d hook them onto her boots. Whichever way the wind was going, you’d give her a push and the wind would take her, and she’d go down the harbour. So then she had to come back on her own, but these were used on the harbour.
Andrea: So was that considered a risky thing to do?
Ed: No, no, they walked across the harbour, oh yes—back then at the time, loads of them. Even when I was going to school, I can remember ice in the harbour. And you could, if you wanted to, jump the ice and so on.
Andrea: Could you skate to Fort Amherst?
Ed: Oh yes. Like I said, because back then it froze. Later on we more or less got slab ice, you know, because things warmed up.

Finally, Ed showed me this set of silver kettles, which his family rescued from the Great Fire of 1892, and kept safe in their Bannerman Park makeshift lodgings. According to Ed, many people grabbed ahold of their kettles when the fire first broke out. 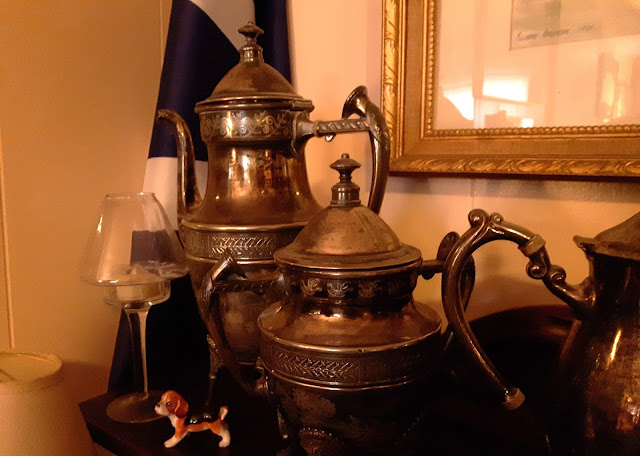 Posted by Andrea McGuire at 4:30 PM