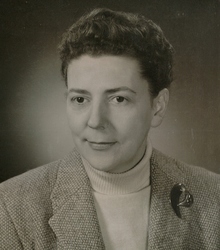 In September of 2013, I had the pleasure of interviewing Janet Story at her home in St.John's on the topic of growing up in St.John's.

Janet Story was born in 1924 and grew up in St. John's, NL. The interview begins with her providing background information about herself and her family, and then reminiscing about the children's game "Hoist your Sails and Run", ice skating, hockey, tube skates, street cars on Water Street, attending Holloway's School, playing marbles in the spring and sliding in the winter, and summer activities such as swimming and catching tadpoles.

Janet also shares her memories of being a young girl in St. John's during WWII, the blackouts of the 1940s and the Air Raid Precaution Group, playing field hockey and basketball as a teenager, and other memories of her early life.

Janet passed away three months after our recording session, but the full interview is available on Memorial University's Digital Archive Initiative.

You can listen to more of Janet's memories of her life in sports here.
Posted by Dale Jarvis at 8:30 AM