This morning was the second in a series of Memory Mug Ups events, this one taking place at the Mount Pearl Public Library. Memory Mug Up's are an informal gathering where participants have a cup of tea and share memories of their lives. In this case the focus was memories of Mount Pearl and the group told stories ranging from the 1950's to the 1990's. We talked about the various shops and hangouts, amenities available in the community, the Mount Pearl Curl, transportation, and other aspects of life in the area. We also shared memories of where people grew up before they moved to Mount Pearl, including childhood games and rhymes. One interesting coincidence was having participants who realized they had lived in the same house on Blossom Avenue, one having sold the home to the other in the early 1970's! 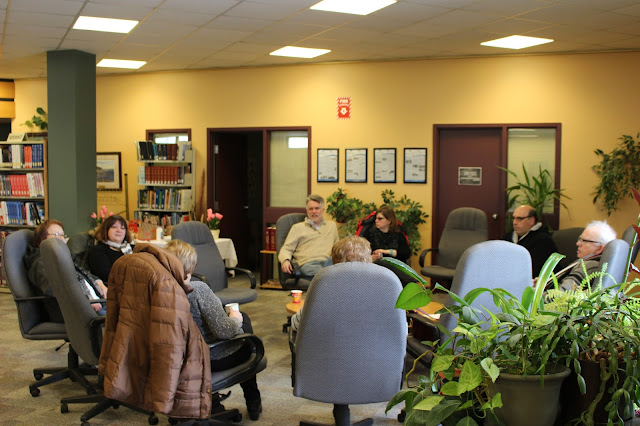 The Memory Mug Ups are part of the Collective Memories Project, an oral history initiative which invites seniors to record their stories and memories for archiving and sharing. Our next Memory Mug Up will take place at the the Marjorie Mews Public Library in St. John's on February 22nd from 2:30 to 5:30.

For more information on how you or your community organization can get involved, email Dale Jarvis at ich@heritagefoundation.ca or call (709) 739-1892 ext. 2
Posted by Kelly Drover at 3:17 PM