Trapped by the heels - a train derailment on the Bonavista Branch Line. #oralhistory 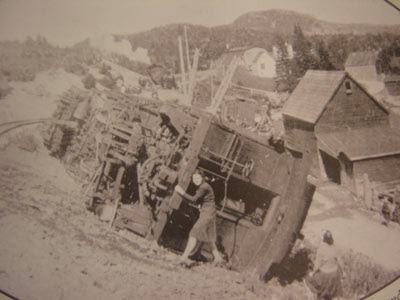 As part of our ongoing Collective Memories project to record the stories of Newfoundland and  Labrador seniors, we've been doing some work with the Clarenville Heritage Society about railway memories.

On 21 July 2016, I had a chat with a couple old railroaders, Lindo Palmer and Baxter Tuck. They were full of stories, as you might expect! We'll post the full interview eventually, but in the meantime, have a listen to Baxter telling one of his father's stories, about the time the mailman was caught by the heels of his boots when a train derailed into a brook on the Bonavista branch line.


Photo Credit:  A derailment on the Bonavista Branch Line.
The roadbed had grown soft, sending the cars into an uncontrolled
rocking motion which tipped them over. Railway Coastal Museum.
Posted by Dale Jarvis at 10:46 AM