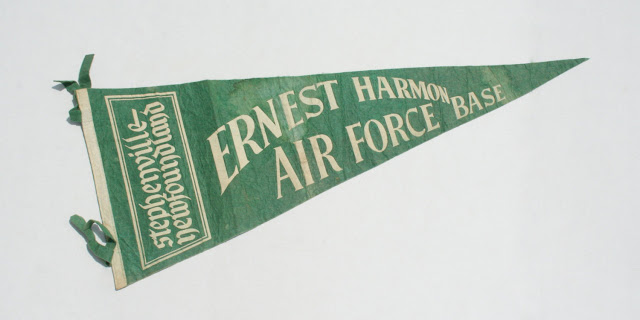 In the 1930s, Stephenville was primarily a French speaking farming village with a population of 500. But with the start of the the Second World War, that all changed. In April 1941, construction began on a deepwater port and adjacent air field, and by 1942 Stephenville had grown into a garrison town with an estimated population of 7,000.

It was an invasion, of sorts, but a friendly one, and Stephenville was home to the former Ernest Harmon Air Force Base from 1941to 1966.

2016 marks the 50th anniversary of the base closure, and the town is putting on a big celebration of its military and aviation history.  I was delighted to be asked to participate, as the folklorist-in-residence for The Friendly Invasion 2016.

I'm in Stephenville all this week, observing, photographing, and conducting interviews with locals and visitors about their memories of Harmon AFB.  My first scheduled interview is at 9am Wednesday morning, so stay tuned! I'll be blogging and tweeting about whatever I learn.

Wednesday night, I'll be acting as host and moderator for "Sharing the Memories – stories of Harmon AFB" at 8 pm at the CanAm Lodge. Tickets are available at the door (limited seating) and at the Dreamcatcher Lodge (709) 643-6655 (cash/debit/credit) and Debbie’s Video (cash/ATM). $3 pp

If you have a memory of Harmon AFB or Stephenville in the '40s, '50s or '60s (or know someone who does), and are willing to be interviewed, let me know! You can email me at ich@heritagefoundation.ca and we can chat by phone or in St John's after the event. Or if you are in Stephenville this week, you can track me down at the Dreamcatcher Lodge! We'll be putting all our interviews online as part of the Collective Memories project, on Memorial University's Digital Archive Initiative.