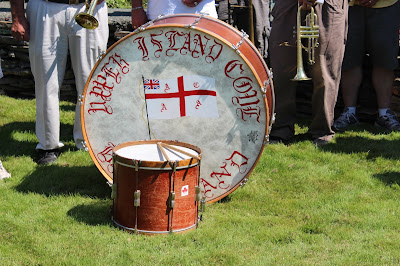 Former Heritage Foundation of NL chair Shane O'Dea spoke on the history of the museum and its place in the development of heritage in the region, a commemorative plaque was unveiled, the women of Coughlan United Church prepared War (Trench) Cakes from a WWI recipe, lemonade was imbibed, and the entire event was opened and closed in style by the gentlemen (and one lady) of the Upper Island Cove Anglican Church Assistance Association (ACAA) brass band.

The ACAA band is unique in Newfoundland, one of our oldest continually-running bands in the province, and over the past century has developed its own unique musical notation system. They played several selections, including the Ode to Newfoundland, which you can listen to here.