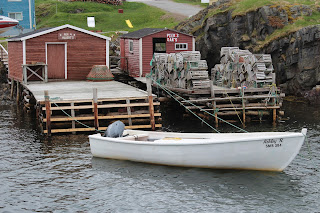 This video clip is from an interview with Ben Hiscock of Champey’s West which is located on the Bonavista Peninsula in Trinity Bay, NL.  Last week I posted a video of Ben and one of his brother Roy both of whom grew up in Champney’s West and had great memories of growing up in the community, ship wrecks and rescues, square dancing, old graves, and local characters.

During a trip to Port Union and Champney’s West doing some workshops on asset mapping and oral history Dale and I had the opportunity to interview Ben and Roy Hiscock. Ben and Roy’s family has been in the community for generations. Both brothers had great stories and I would like to showcase a couple of their stories on the blog.


If you are in the area during August 7th-9th, 2015 make sure to stop in for the Champney's West days including their cardboard boat race on Sunday!

-Terra
Posted by Terra Barrett at 8:50 AM