Folklore Photo - The Hole In the Floor and Adolphus's Wake 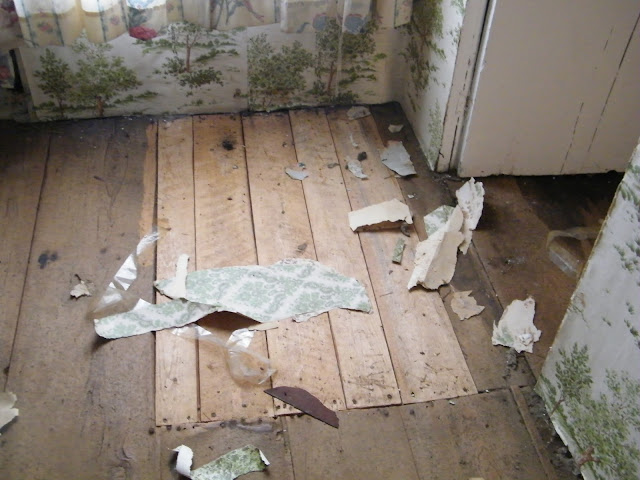 This week's folklore photo might not look like much, but it comes with a great story, and is a very good example of how intangible cultural heritage and our built heritage are intertwined.

We've been working on an oral history of the Jenkins House in Durrell, Twillingate, which was owned for a portion of its history by Adolphus and Lucretia Jenkins.

According to oral history, Lucretia contracted tuberculosis and suffered in the home for many years with the disease. She was confined to her bedroom while her daughter Leah Jenkins cared for her, surprisingly Leah never contracted the disease herself. While Lucretia was sick her husband Adolphus passed away. Adolphus was waked in the home, which was tradition at the time. Bedridden and unable to leave the upstairs of the house, Lucretia still wanted to see her husband one last time. The family decided, instead of trying to bring her downstairs they would saw a hole in the floor by the side of her bed so she could rest and still be able to see her husband, so that is what they did. Today, the cut in the floor is still recognizable by the newer boards that fill where the hole once was.

“Well, I tell you about that now. I never told anybody about it before. When father passed away, they waked him downstairs. So Lucretia was bed ridden upstairs with TB and separated from the family. She wanted to see her husband while they had him waked. So what they did, instead of bring her downstairs, they cut a hole in the floor so she could look down from her bed and see him. So the floors are to stay like that.”

You can download the full oral history report on the Jenkins House in PDF format here.