A day of water in Cupids, Newfoundland 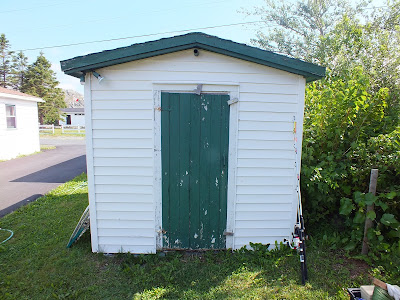 Last week Dale, Claire, Nicole and myself travelled out to Cupids, Newfoundland to meet up with some friends and talk about water sources. We left Nicole for the morning at the Cupids Legacy Centre to teach her Pillow Top Workshop, and the rest of us met up with Peter Laracy, the General Manager of the Legacy Centre. He showed us around Cupids for the majority of the day, and we started our tour with his own well. His property has had a well on it since 1918, and the well went through several facelifts, first in 1965 and then in 1978. It is now expertly housed, and includes insulation and a pump for a year round water guarantee! Peter even invited me back at the end of the summer to help him clean his well - I can't wait!

We then went to meet Vernon 'Bucky' Whelan, and he had quite a few stories to share. Bucky first showed us an old spring that had been cemented in near his property. This spring has been around for as long as anyone in the community can remember, and in fact was once thought to have been a source of water for John Guy and a brewhouse in the seventeenth century. Bucky also showed us where a barrel well used to be on his property, and told us about a spring that filled near the back of his property and used to be used for horses. He also had some great memories to share, about how important water is, the cold and pure taste of springs, and carrying water with hoops in turns. It was a treat! 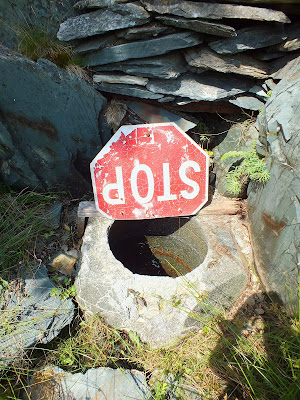 We next went to meet Christine Fowler, a relative of Peter, who had an amazing traditional, almost kitschy looking well house with some delicious well water hidden underneath. We've seen quite a few of these around Newfoundland as lawn art pieces, but this is the first well I've seen actually housed underneath one. I love the traditional, simple design to these wellhouses - these are what I think of when I think wells! We also went and saw her brother's well next door, which was one of the deepest I've seen so far (242 inches!) and more modern, with PVC lining and a metal pitched roof. Before leaving we got to pet his pony in the backyard - adorable. 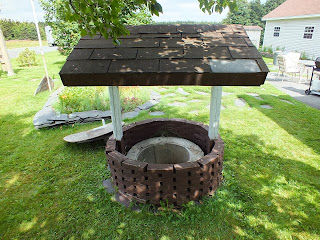 We then went on a bit of a hike out into Greenland, where Peter knew of a long forgotten spring. Peter told us that there were once houses out in this area, but in the 1940's the last few households moved into where the modern town now is. This round well looks to be like a closed in spring, shallow and completely lined with rocks. It was great to see such a secluded spot for a well, and really made me think about how many more were hiding out in the Greenland woodlands.

On our way back to the Legacy Centre, Peter ran into his friend Ross Dawe, who had a great old car and three different water sources on his property, including two wells and one spring that he used in dry times. We also stopped and chatted with Lloyd Kane, who had an old well nestled behind a gorgeous honeysuckle tree that hadn't been used in decades. While the well was nothing spectacular, the tree hanging over it, nestled in a green backyard, really seemed almost magical. 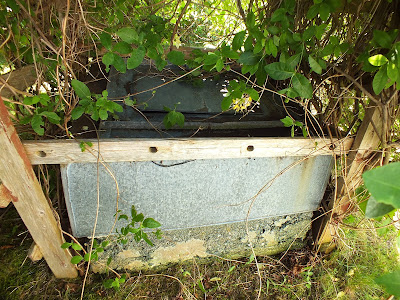 Once back at the Legacy Centre, we said goodbye to Peter, grabbed Nicole, and went to the Cupids archaeological site to have a chat with William Gilbert, the lead archaeologist. He told us about an attempt at an archaeological dig near the spring we had been shown  earlier by Bucky, and that even though nothing was found, Bill still believes that the brewhouse that John Guy had in his colony was over there. He also showed us a well in the back of the Cupids plantation house that has yet to be excavated. There are busy up there on the dig in Cupids, so we were very thankful for the tour!

After a delicious lunch we headed out to see one final spring, out along the Bay Roberts heritage trail. This spring has been closed in with rocks, and is right off the trail path. While I probably wouldn't recommend drinking from it, it's a great spot for Fido to get a sip while out on the trails. As you can tell, it was a great spot with an incredible view. 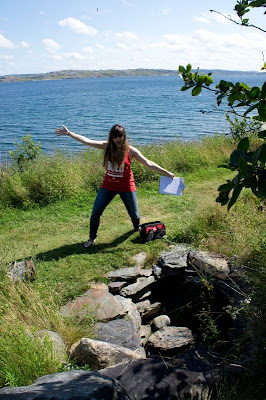 We got to see a lot of wells, and talk to a lot of people - it really put a spring in my step!

I am still looking to hear from people about their wells, springs, and water memories: what does water mean to you, how have you sued it, and what do you remember about it? I would love to have a chat with you!