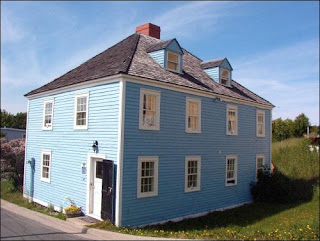 Have you ever wondered what the oldest structure is St. John's is? Anderson House, built circa 1804-1805, is most likely the oldest in the city. The structure was built for James Anderson who was a sergeant in the militia at the time. Anderson House was designated as a Registered Heritage Structure by the Heritage Foundation of Newfoundland and Labrador on March 23, 1996.

It's getting a makeover right now with siding repair and they made the door a cheery yellow.