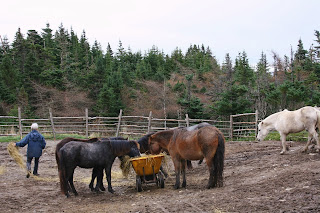 The Newfoundland Pony is an important part of Newfoundland's history and some people even refer to them as a "heritage animal." It is thought that without their labor, it wouldn't have been possible for settlers to stay on this island. Ponies did a great deal of our brunt work for many decades--they are hearty animals that could withstand difficult conditions, such as poor weather, bad grazing, and food scarcity. Traditionally ponies would be used for hauling fish, pulling lumber from the woods, turning soil in the fields, pulling stumps from the ground, and of course, for transportation. They helped the people of Newfoundland subsist on this land up until the 1960s and 70s when they were almost completely replaced with motorized vehicles. During that transitional era pony populations saw a major decline. When once there were 10,000 ponies, the population fell to around 50. Nowadays, some people recognize all of the work that the pony did to help us, and are working to protect the ponies we still have. This is done through breeding programs and by ensuring that ponies have good homes.

Liz Chafe of The Goulds has been working with ponies since she was a young girl. She now owns and operates a pony refuge in Cappahayden with her husband Peter. It is a great deal of work for them to house these animals. Right now they have 11 ponies, 1 cow, and a dog. This past weekend, myself along with HFNL staff member Dale Jarvis and volunteer Joelle Carey went to see Liz at the pony refuge to see how we could help with the workload. Joelle was particularly interested in visiting the farm because she will be working as an intern with the Newfoundland Pony Society starting in January. It was a good albeit rainy day, and we got a sense of what kind of work it takes to care for these animals. We hope to go back again soon with as many volunteers as we can wrangle.
-Lisa