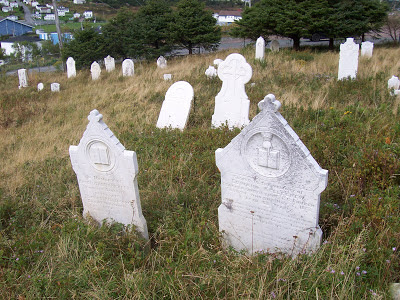 We've had a good response so far to our Cemetery Workshop, which will be held at the Johnson GEO Centre on Tuesday, December 4th, starting at 1pm. Cost to participants is $40 for the day, includes snacks and coffee/tea. A number of students have expressed interest in attending, so we've added a special $20 student rate for the workshop.

The day will be broken into two sessions. The first is on Art and Archaeology, the second is on Conservation and Heritage.

Presenters to date include:

Martha Drake - Archaeology and the Portugal Cove Cemetery
Several years ago, graves were excavated from an unmarked cemetery during a proposed housing development in Portugual Cove. Martha Drake will talk about how a stop work order was put in place, and how the graves were professionally investigated and the human remains brought to MUN. The Town has created a small park where the graves were uncovered and the remains will be reburied in the newly developed park setting.

Melanie Tucker - Stonepics Database
Stonepics, a database of over 300, 000 headstone and cemetery photographs from all around Newfoundland, is owned and created by Mr. Kimsey Fowler who lives in Seattle, Washington. Melanie will speak about this fabulous database, and illustrate how it can be used for research.

Andrea O’Brien - Cemeteries and Municipal Heritage Designation
Andrea will explain the process through which towns designate cemeteries and detail services offered to towns by HFNL, including historical research, writing a Statement of Significance for the cemetery and placing the designation on the Provincial Register of Historic Places.

Lisa Wilson - The Port Royal Cemetery Restoration Project
This presentation will be photographic journey detailing the graveyard restoration project that took place in the summer of 2012 in the resettled community of Port Royal. Aside from the discussing the challenges of working in isolated conditions, Lisa will be going over some of the conservation dilemmas the team encountered, while offering ideas for best practices for those who are embarking on similar projects.

Annie McEwen - From the Field: Headstone Rubbings and Maker’s Marks
Annie's talk will be informed by her most recent field experience at the Port Royal Cemetery on Long Island, Placentia Bay. She will discuss the stories behind grave signatures or maker’s marks as well as the importance of headstone rubbings and their practical application. Rubbings can be an excellent way to record headstone information as well as capturing the beauty and uniqueness of the stone. Examples of rubbings done this summer at the Port Royal Cemetery will be shown.