Memories of Lych Gates in Newfoundland - gateways for the dead 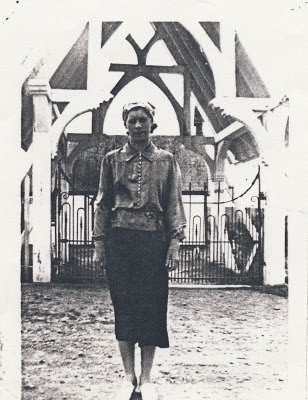 This undated photograph shows an unidentified woman standing in front of the lych gate, the entranceway to the grounds of the Alexander Chapel of All Souls, located on Coster Street in Bonavista.

The elaborately beamed lych gate is a feature typical of Anglican churchyards. Traditionally, it was the sheltered point at which the coffin was set down at a funeral to await the clergyman's arrival. In some instances, a portion of the burial service was performed while the coffin rested inside the gate. A common feature in English churchyards, the concept of the lych gate was transplanted to North America. "Lych" is a form of the Anglo-Saxon word "līc" meaning body or corpse.

Once common, the only surviving Newfoundland example I know of is in Bonavista. The original lych gate was constructed circa 1899 and was financed by the Church of England Women's Association of Bonavista (1).


Dear Sir, - on Monday the 4th inst., there was no small stir here among the members of the C.E. Sewing Class, and one would naturally ask the cause. But a poster would apprise of the fact that a “sale of work,” under the auspices of the above ladies, was about about to take place; its object, to provide funds to provide a lych gate for the new cemetery. At about 6.40 p.m. the doors were open to purchasers, and when I arrived a few minutes later - considering inclemency of weather - quite A Crowd Had Gathered.

According to the author, the amount raised, $76, "was far above expectation" (2).

The Anglican Cemetery on Forest Road in St. John's also had a lych gate, which was torn down at some point in the second half of the 20th century. It is shown on aerial photographs from 1961, but was removed afterwards. According to HNFL Executive Director George Chalker, it was removed possibly to allow motorized hearses access to the cemetery.

If you have memories, or photographs, of lych gates in Newfoundland, I'd love to hear from you. You can call me at 1-888-739-1892 ext 2, or email me at ich@heritagefoundation.ca