Diamonds are for weavers

A few weeks ago the ICH office, in partnership with MUN's Folklore 6740 class, put off a craft workshop called Weaving in the Woods. Participants had the opportunity to make their own pillow top, an item traditionally made by men in the lumber camps to gift to wives or girlfriends, and mothers. Since the workshop I have been contacted by people who wish to share their pillow top memories and pictures.

Loretta Weeks got in touch and shared some pictures of her pillow top, which she also knew as a cushion cover. Her father, John Weeks, of Broad Cove (now Duntara) made the pillow top while working for the American army. 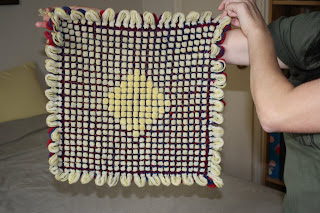 Weeks notes, "my father worked on the pillow top in Fort Chimo in northern Quebec, this was when Fort Chimo was just a small settlement.  He was working on communications towers for the American army. I was told that he finished the top when he came home for a break in the winter."


According to Weeks' description, the pillow top was mostly likely made between 1941 and 1945, when Fort Chimo (now Kuujjuaq) was used by the American military as an air force base. 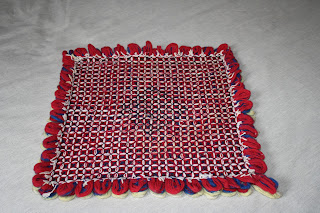 This was not a common craft  in Duntatra and the only pillow tops Weeks knows of are the few her father made. But her father was a very creative man and tried his hand at many activities such as furniture making, boat building, upholstery and carpentry (he built his own home in Duntara). He also made wheelbarrows and truckleys.

"Dad could also knit and no woman could darn a vamp like him! He could upholster anything and could sew covers for the old daybeds and chesterfields better than anyone could ever buy." 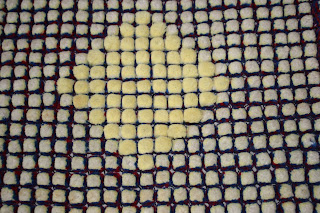 Weeks' father loved diamond patterns, "there are diamonds on the front door lintel and frame on our house in Duntara. I have a table back home with a marquetry top that has inlaid diamond patterns on it and there is also a wooden box he made with diamonds inlaid in the design."

Weeks' father passed away May 2, 2011 after a brief illness, at the age of 88. Today Weeks holds on to her father's pillow top, with its unique diamond pattern, as a reminder of him and his handiwork.

"He was quite the character in a quiet, soft-spoken way. This pillow top is the only one we have from him adventures of working away all those years."

Posted by Nicole Penney at 1:13 PM