Look to the skies! The Hindenburg over Newfoundland - a research project 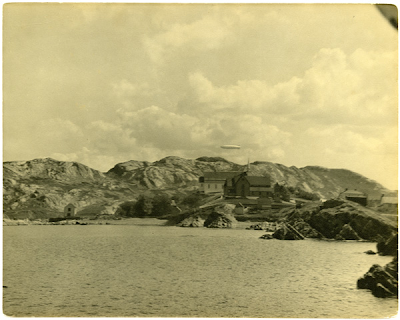 From 1936 to 1937, the German dirigible, LZ 129 Hindenburg made 14 flights over Newfoundland. Researchers at Memorial University are trying to recount and record these trips and are looking for first and second hand stories of the Hindenburg flying over Newfoundland and Labrador. Documents show that the Hindenburg was spotted over Brigus, CBS, Corner Brook, Cupids, Fortune, Lamaline, North West River, Pouch Cove, St. Anthony, St. John’s and Stephenville.

If you or someone you know remembers the Hindenburg passing overhead, have heard stories of it, know of other communities where it was spotted, or have pictures, please email historicaviation@gmail.com so that this amazing piece of Newfoundland history can be recorded and saved.

"This video might also be of interest to you," notes archaeologist Lisa Daly. "It's taken near Cape Race on the final flight of the airship."

"On the third day we sighted Newfoundland. Binoculars and cameras appeared, and my wife’s delight grew when the white dots along the coast turned out to be icebergs. The captain ordered the ship to fly low and steer toward them. Very slowly we passed over the most beautiful, which looked like a magic marble statue. The sun came out and laid a double rainbow around the airship. The giant iceberg turned into a monument of sparkling brilliance. We glimpsed the foothills, the lighthouse on Cape Race, the limitless forests of the hinterland. Then the coast sprang back and we floated, a gray object in a gray mist, over the invisible sea."

And, if you haven't seen it, check out this original footage from the British Pathe archive. It shows impressive shots of the Hindenburg flying over its landing ground at Lakehurst, New Jersey, and then  footage of the famous crash.  View it on YouTube here.

My father was a little boy back in the 30's when he saw it fly over Port-au-Port. Being so young, and not seeing anything like it before, he thought it was a Giant Flying Pig! :)

My grandfather used to always say he saw the Hindenburg fly over Corner Brook. I even researched some of the old flight paths but couldnt find any definite information on it. Sadly he passed away two years ago but but I do remember hearing him tell that story many times about it passing right over Corner Brook.

My aunt Muriel Smith grew up on Humber heights in Corner Brook during the 1930s she is now in her early 90s. she told us how her friend Muriel Osmond and herself took a photo of the hindenberg as it passed over their home on Humber heights . the picture was taken with An old box camera I have copy showing the power lines overhead and the hindenberg in the sky.

If Mr. Bartlett was of the Barlett families of Humber heights and of a similar age perhaps they viewed the same flight.

Thank you for posting your family stories about the Hindenburg.

On this website (http://www.airships.net/hindenburg/flight-schedule), you'll find a map of her 1936 North American crossings. It is not very accurate, and does not show it crossing Corner Brook, and only perhaps passing by Port-au-Port, but with these stories, and others, we know it flew over this part of Newfoundland.
I hope that when I compile more stories and pictures, I will have a better idea of the route the dirigible took over Newfoundland. So far, I have your reports and a picture of it over Deer Lake.
Thank you again for sharing.

Here is a direct quote from my Aunt growing up in St. John's Newfoundland.

". Happy times for children not
knowing hard times for parents. Except in being afraid seeing this strange
thing in the sky which turned out to be the Hindenburg in 1936/1937."