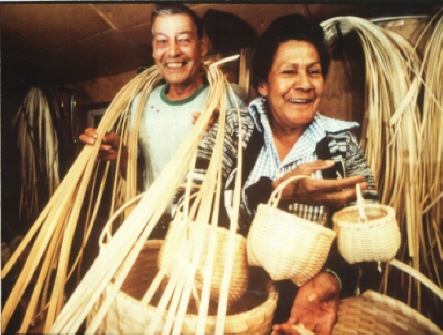 This past March, as part of our Rooted In History basketmaking forum, we were lucky enough to have Nova Scotia Mi'kmaw basket maker Della Maguire as a participant, who was in Corner Brook teaching an ash basket workshop along with Margaret Pelletier.

Della's parents, Abe and Rita Smith, shown above, were both noted basket makers (you can read more about them here and here) as well as being champions for Mi'kmaw culture. Della gave us a recording about her mother's basket making that was originally filmed for the children's television program Sesame Street, a recording which was then re-aired following her mother's death in 1996. We have Della's permission to post it here, and hope you enjoy!

This was produce by CBC Directed by Darrel Gray for Sesame Street. I was the Mi'kmaw consultant/coordinator/production assistant to contact Rita and Noel (Abe) Smith and work on set with them. I loved this piece. I wish CBC and Sesame Street would release it so our schools, families and communities could use it forever. M'sit Nokomaq/ Catherine Martin/ Filmmaker