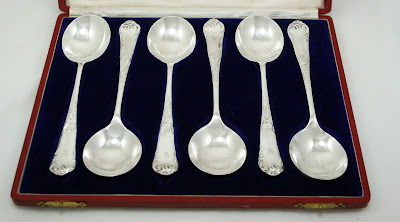 Admire if you will, in their fitted red case, these 1912/13 silver Walker & Hall soup spoons. I love them. I appreciate a proper soup spoon, with a deep, rounded bowl. When I'm dining out, and someone serves me soup and then presents me with a tablespoon with which to eat it, I always feel slightly cheated. That happened to me earlier this week, at a higher-end restaurant in St. John's. The soup was lovely. The spoon left me cold.

Most people would just go home and forget about it, but material culture geek that I am, I realized that I had no idea why people insist on tablespoons over soup spoons, or why we even have something called a tablespoon at all. And that I truly needed to know.

So, I spent my holiday Friday drooling over websites like the California Academy of Sciences collection on the history of eating utensils and this silver collector's website on the history of spoons.  I read the Wikipedia articles on soup spoons, tablespoons, dessert spoons, and teaspoons. And I came to the realization that while I love spoons, and although I am a proud owner of all of the above (plus a couple of lovely serrated grapefruit spoons), that I am nowhere near as obsessed as this guy.

To save you the work of reading all of these sites, here it is, cutlery lovers, in a nutshell.

Before about 1700, people generally brought their own spoons to the table. From about 1700 the place setting became popular, and along with it came new words: "table-spoon," "table-fork," and "table-knife."

Tea drinking had been introduced to England around 1660. Because tea was rare and expensive, tea cups (and spoons) were small. Around 1710, the East India Company started importing tea from China, and as tea prices declined, the size of teacups and tea-spoons increased.

The 1700s saw the development of all kinds of spoons, including the coffee-spoon, and dessert-spoon (roughly equal to two tea-spoons, or half a table-spoon). By the time of the publication of the first Oxford English Dictionary in the mid 1800s,  the hyphen had been dropped, and "tablespoon" became the common spelling. Presumably the use of "table-forks" fell off the table at some point, so to speak.

By the end of the 19th century, the soup spoon had developed. The tablespoon, which had been used for eating soups and suchlike, was elongated and was thereafter primarily used for serving, rather than eating. In the UK, the dessert-spoon and soup-spoon began to displace the tablespoon as the primary implement for eating from a bowl, at which point the name "tablespoon" took on a secondary meaning as a much larger serving spoon.

At some point in history, the meaning of "tablespoon" diverged, depending on which side of the Atlantic you were on. By the end of the 20th century, in much of English-speaking North America, a tablespoon was the largest type of spoon used for eating from a bowl. In the UK and most Commonwealth countries, a tablespoon was still the type of large spoon usually used for serving. With the spread of American cooking books, and the typical use of tablespoon and teaspoon as a measurement system, the older meaning of tablespoon as an eating spoon is apparently enjoying a revival in the UK.

So why has the use of the soup spoon fallen out of favour in North America? I still don't know. But here, halfway down the page,  is a nice picture of an old teaspoon from a Beothuk site on the Exploits River to keep you busy, while I continue to investigate.

As for the spork? There I dare not go.

Well Dale here we have a strong common interest except my main spoon interest runs through medieval up to 1700. My take on it (speaking as someone who lives very close to Sheffield and Birmingham the two cities that did more than any to flood the market with vast quantities of tableware) is that the 18th century was a time of conspicuous consumption, rising affluence and falling production costs due to industrialisation. What were the cutlers to do when folk already had a knife fork and spoon? First let them know it is bad etiquette not to provide cutlery for visitors so you need lots of sets. Then you need to increase the number of items in each set so eventually we ended up with each table setting having dozens of different knives forks and spoons. One well designed spoon will happily function to eat solid or liquid food from a bowl though admittedly many are poorly designed. We have a gathering of spoon nuts coming together to discuss design and carve together this year. http://spoonfest.co.uk/