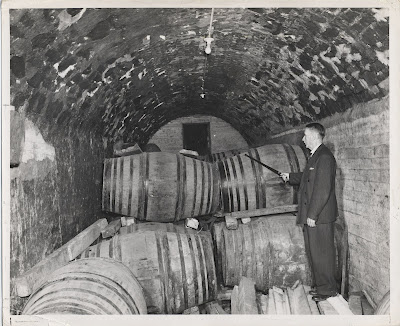 Earlier this summer, I borrowed a collection of photographs from Provincial Historic Sites which show various interior and exterior scenes of the Newman Wine Vaults on Water Street, and the associated Newman Building on Springdale Street, here in St. John's.  Vaults staff have scanned those photos, and we are currently compiling metadata for the photos, which will be added to a new sub-collection for St. John's on Memorial's Digital Archive Initiative.

The photo above is undated, but is probably from the early to mid-twentieth century.  I don't know the identity of the gentleman with the cane; if you know, email ich@heritagefoundation.ca.


A "pipe" is an old unit of measurement for wine or port, sometimes called a "butt" and equal to two hogsheads, approximately 475 to 480 litres.
Posted by Dale Jarvis at 12:41 PM