Guy Fawkes Night commemorated by Parks Canada... with a bang! 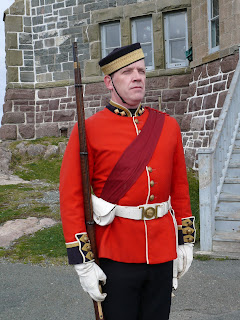 On October 26, 1605 an anonymous letter to the William Parker, 4th Baron of Monteagle warned that on the opening of Parliament the following month, a "terrible blow" would be delivered to King James I and his court.

Investigation revealed 13 conspirators and 36 kegs of gunpowder planted beneath the Parliament's undercroft. Thus, the "Gunpwder Plot" and the conspiracy to assassinate the King and government by Guy Fawkes and others was thwarted.

On November 4th, 2010, Parks Canada Military Animation Specialist Robin Martin fired 12-round rifle salutes at 12pm, 3pm and 7:30pm totalling 36-rounds- one for each gunpowder keg discovered under the Parliament.

Dale Jarvis met up with Robin Martin after his first 12-round salute, and chatted with him about the interpretation program, the history of Guy Fawkes Night, as well as his own person memories about the celebration of Bonfire Night in Newfoundland.

Listen to the interview here.
Posted by Dale Jarvis at 12:16 PM