In an earlier post, I had mentioned the Baccalieu Trail Public Folklore Project. We got an email this morning from the Oregon Folklife Network, asking about the project, and so I thought I'd give a few more details on the project's origins, and our plans.

Last year, the ICH program received a training grant that allowed us to develop and deliver a whole series of workshops across the province, on a variety of things like planning folklore projects, oral history interviews, digital recording, Google mapping, etc. We were able to cover a lot of ground, geographically.

The issue I have with this sort of shotgun approach to training is that while we reach a lot of people, there is little to no followup. We don't always have a good sense of what people actually DO with the training once we leave, and we rarely see any sort of finished product.

This year, are doing things a little differently as a result. We picked one region to concentrate our work in, and we'll be working with a number of communities over a several month period.

In theory, the project will work like this. We have called a general meeting next week of all the towns and local historical societies. We'll give an overview of the intangible cultural heritage office, and about the training project specifically. Then I'll lead everyone through a brainstorming and focussing session, to pick out 3 or 4 traditions/customs/bodies of traditional knowledge that the communities in general are worried about losing. So, for example, it might be something like a particular aspect of the fishery, or one particular traditional craft, or a folk dance.

After the session in Cupids next week, I'll then go away, and think of a manageable project that we can do in the region around that theme. 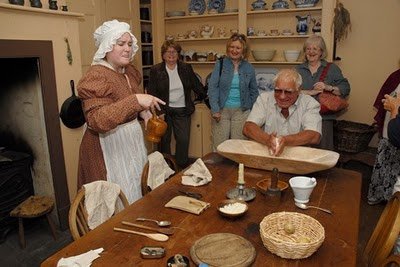 So say the theme was bread making. We'll come up with some sort of rough idea of a final project, a festival or museum exhibit around that theme.

Then, we'll adapt the workshops we have and deliver a series of them in different towns throughout in the region, using that theme of "bread" as a focus.

So, if we were doing our project planning workshop, we'd teach communities to plan out the festival or exhibit, based around bread. Then we might do an intro to oral history workshop, and bring in a few breadmakers for them to interview. Or do a festivals workshop, focussing on how to run a folklife festival, and use that workshop to plan a one day event around baking. The idea is that at the end of the workshops, we'll have a real project that the communities will have worked on, as well as a model for doing their own projects down the road.

At the moment, it is somewhat vague, because I'll be responding to the issues and concerns of the communities that come out to the first session next week. I won't know exactly what workshops we'll be offering until we consult with communities.

We'll be documenting the process, and compiling a handbook that community groups will be able to use. I'll make it available to anyone who wants it, when it is finished.

The meeting is open to anyone from the region who wants to attend.