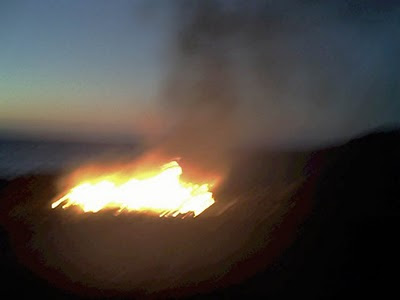 Tomorrow is Bonfire Night in Newfoundland and Labrador, and one aspect of the tradition has been, in the past, the burning of tires. In researching the Festival On Fire, several people shared stories about burning tires, and how tires were particularly prized as bonfire materials.

I'll be doing a Radio Noon Crosstalk tomorrow on the topic of Bonfire Night. Today, host Ramona Deering forwarded on the following press release from OceanNet, on the topic of tire burning. Is it a tradition that deserves to flame out? Comments welcome below, or phone into Radio Noon on November 5th with your thoughts! I've included some links at the bottom to sites talking about eco-friendly Bonfire Night celebrations, as well!

Tire Burning In Newfoundland and Labrador

Ocean Net (www.oceannet.ca) is extremely concerned with the significant negative environmental and health repercussions arising from the burning of tires in the province. Our research indicates that this is an accepted practice in many communities in Newfoundland and Labrador on Guy Fawkes Night (“Bonfire Night”), and we have pictures of just such a fire which took place on Middle Amherst Cove Beach in 2004.

Tire burning in this province is banned under the “Environmental Protection Act – Air Pollution Control Regulations 2004, Schedule E” In fact, of the top 20 “Materials Prohibited from Burning in a Fire” listed in that Act, tire burning is in first place, and fines could reach $100,000. This is obviously not common knowledge throughout this province as is evidenced by the rash of “tire fires” which take place in our communities, especially on the annual “Bonfire Night”. This practice must stop!

A review of documentation on the web related to health and environmental threats associated with tire burning, shows that emissions have been found to contain dioxins and other emissions which cause cancer and severe respiratory problems in humans, and also affect the immune system. Immune systems are also compromised in wildlife including birds, fish, shellfish and mammals, resulting in gross deformities.

One of Ocean Net’s primary programs is the beach, shoreline and harbor site cleanup, and as of May, 2006, this organization has spearheaded 876 such cleanups with an estimated 10,000 volunteers throughout the province. One such cleanup, done several times in 2004, is “Middle Amherst Cove Beach”, which we recorded as being littered with debris from a fire built primarily from hundreds of tires on Bonfire Night 2004. An Ocean Net employee documented this event with photographs following an unsuccessful attempt to stop those involved from burning tires on that beach. It is our understanding that tire burning also happened in Elliston, and that issue has now been reported to the RCMP as directed by the Act.

Ocean Net is currently in the early stages of researching the subject of tire burning, especially as it relates to environmental and health issues, with additional research into government plans (or lack of them) for disposing of huge stockpiles of used tires in the province.

Our plan is to undertake further research, and to develop a public awareness campaign related to the health and environmental repercussions from tire burning.

I find it amazing that bonfire night is recognised as ICH in Newfoundland and yet not in the UK. I suspect that there are fears of rekindling old divisions between protestant and catholic though for 99% of folk it is just a "wonderful old tradition that we have always done."

My brother and I happened to be in Newfoundland on Bonfire Night 2010. We passed by a large bonfire in Adam's Cove, Blackhead, Small Point area on our way to a relative's house. We had no idea what the occasion was. We witnessed residents carrying what we though was wood and cardboard boxes down to the fire. Our hosts explained the nature of the event to us, and later my brother and I walked down to the beach for a look; by then the crowd had cleared out. We couldn't believe our eyes. We thought, are these people insane, who burns tires, especially on a shoreline? This is criminal!

The next day we visited Brigus; another junk fire.

The following day we went to Bradley's Cove. Two days after Bonfire Night the tire embers were still smoldering. Bradley's Cove (specifically Tacker's Cove) was the worst. There was such a huge pile of steel rings from the radial tires that we feared getting tangled up in them making our way to the beach. The acrid smell made it hard to breathe, and the rocks were black with tire residue that wouldn't wipe off our shoes. We could only assume the local residents expect the steel and residue will get washed away with the next big surge of waves and carried out to sea; erasing all evidence.

Weeks later, I'm still bothered by what I saw. It's a very real shame.