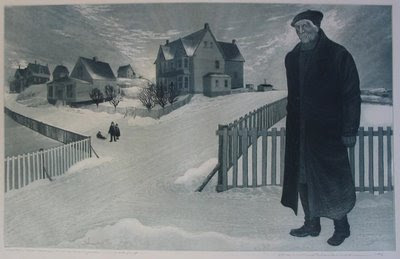 David Blackwood, one of Canada's most respected visual storytellers -- and an honorary degree recipient from Memorial -- will give an illustrated public lecture on Thursday, Nov. 20, at 7 p.m., in the Great Hall of Queen's College at Memorial. During the talk, Dr. Blackwood will discuss how growing up in outport Newfoundland has shaped his work and his life. His talk is in celebration of the 40th anniversary of the founding of the Department of Folklore at Memorial.

"David Blackwood is a dominant and charismatic force, not only within Canada but also in the international art scene," said Dr. Paul Smith, a professor in the Folklore department. "His work translates the sagas of Newfoundland's traditional culture and commemorates a way of life quite foreign to the majority of Canadians, let along the rest of the world. I speak for all my colleagues in folklore when I say we are thrilled that he is giving this talk in honour of the 40th anniversary of the founding of our department."

Dr. Blackwood's work has been exhibited nationally and internationally with over 90 solo shows and scores of group exhibitions. He has been the subject of two major retrospective exhibitions and the National Film Board's Academy-Award nominated documentary film Blackwood.

His work may in found in virtually every major public gallery and corporate art collection in Canada, as well as in major private and public collections around the world, including the collection of Her Majesty Queen Elizabeth II (at Windsor Castle) and the Uffizi Gallery in Florence, Italy.

Seating for the Nov. 20th event is limited. To reserve a seat, please contact the Department of Folklore by calling 737-8402 or e-mailing folklore@mun.ca. Parking is available in Lot 19 in the front of Queen's College and on meters in adjacent parking areas.
Posted by Dale Jarvis at 4:26 PM