In October 2018, Heritage NL staff rushed down Water Street to rescue an old shop sign from the business of Lewis and Grunia Ferman, Jewish merchants and WWII resistance fighters. That event unlocked a flood of stories and memories about the Ferman family, and about other merchants who had business in St. John's and beyond.

In this episode, we look at the legacy of immigrant merchants in Newfoundland, with clips from interviews about both the Ferman shop, and the multicultural shopkeepers of Windsor who are featured in a new Virtual Museums of Canada exhibit.

The Living Heritage Podcast is about people who are engaged in the heritage and culture sector, from museum professionals and archivists, to tradition bearers and craftspeople - all those who keep history alive at the community level. The show is a partnership between HFNL and CHMR Radio. Past episodes are hosted on Libsyn, and you can subscribe via iTunes, or Stitcher. Theme music is Rythme Gitan by Latché Swing.
Posted by Dale Jarvis at 10:16 AM No comments: 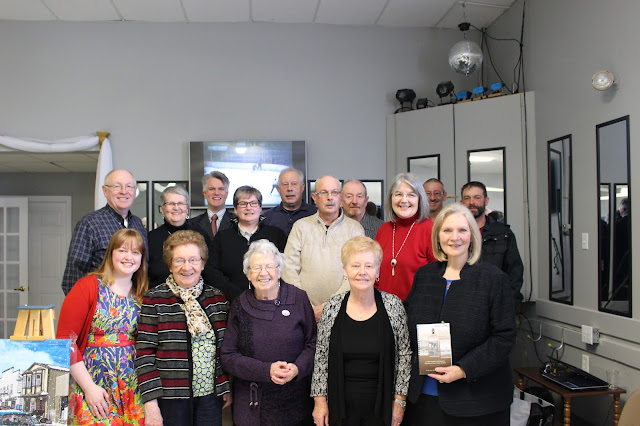 In September 2016 researcher Terra Barrett spent a week in Grand Falls-Windsor collecting stories and memories of Main Street, Windsor. This was part of the Merchants and Memories project which was a partnership between the Heritage Foundation of Newfoundland and Labrador and the Grand Falls-Windsor Heritage Society. The Society wanted to focus on Windsor to celebrate the diverse community that grew up on Main Street across from the train station. This podcast is a selection of memories about Main Street which take the listener back to the heyday of the shopping district of Windsor. Take a listen to learn more about fights at the pool hall, movies at the Vogue Theatre, people watching at the train station, and shopping at Riff’s and Cohen’s.

On September 21, 2016, as part of the Collective Memories project, I interviewed John Connors of Grand Falls-Windsor about his family’s business and experience on Main Street.

In this interview John discusses his grandfather’s work as the first Railway Station Master, his father’s start in business, and the growth and development of Brown Derby from a restaurant on Main Street to the major wholesale business it is today.

Roy Oldford also of Grand Falls-Windsor described the restaurant:
The Brown Derby was a little café you went in and sat down. There were seats. They had a jukebox and roller seats around the counter and that was a pretty popular place for people to go and have a meal or whatnot especially if you came in on the train. We spent a lot of time at the Brown Derby and it was a typical teen and other place at that point in time.

Click here to listen to the interview with John and learn more about the Brown Derby.

On Saturday, March 4th, Dale, Kelly, and I attended the "Merchants and Memories of Main Street" booklet launch in Grand Falls-Windsor. The launch took place in St. Joseph's Parish Hall just around the corner from Main Street where the memories of the booklet focused.
“A Little Montreal: Merchants and Memories of Main Street, Windsor” is the third booklet in the Collective Memories Series produced by the Heritage Foundation. This booklet focuses on the memories of people who grew up, lived, worked, and shopped on Main Street with a particular emphasis on the merchants and shops of Main Street, Windsor.
The Grand Falls-Windsor Heritage Society (GFWHS) had a collection of their archival photographs from Main Street projected on the wall.  They displayed several 8mm and 16mm films from Grand Falls and Windsor including a soap box car race, baseball and hockey games. The Society also placed photocopied photographs and documents on a table for visitors to view and help identify the people pictured.
The launch was a great success with over 150 people turning out and all the booklets being sold in a matter a minutes. The Society is placing an order for more printed booklets and can be contacted here! A PDF version of the booklet will also be placed online through Memorial University's Digital Archives Initiative.
There were lots of refreshments provided following a couple of speeches and readings by three participants showcased in the booklet.  The Heritage Foundation had three large banners printed and displayed around the room which prompted stories and arguments had over who was in the photographs. After the official launch there were photographs taken of the staff members from different stores on Main Street such as Riff's, Cohen's, Stewart's, etc.
The Main Street booklet is part of the foundation’s Collective Memories Project. This project is an initiative of the Intangible Cultural Heritage Office of the HFNL, with funding provided by the Department of Children, Seniors, and Social Development. The Collective Memories Project invites seniors to record their stories and memories for sharing and this booklet and launch was an excellent opportunity to do just that!
~Terra Barrett
Posted by Terra Barrett at 8:28 AM No comments:

“It was very small but it was like a little Montréal. A lot of different cultures and sights and sounds,” described Corey Sharpe. “The business owners on Main Street came from China, Lebanon, Syria, Russia, Norway, Ireland, United States, England so it was a melting pot of cultures.”

“This booklet developed as a result of conversations with the Grand Falls-Windsor Heritage Society,” says Terra Barrett, a researcher with the foundation. In recent years the Heritage Foundation has assisted with the digitization of some of the Society’s archival materials but most of that material focused on the AND company, the mill, and the former town of Grand Falls,”“This project focused on Main Street in order to showcase and learn more about the Windsor part of the community.”

The Main Street booklet is part of the foundation’s Collective Memories Project. This project is an initiative of the Intangible Cultural Heritage Office of the HFNL, with funding provided by the Department of Children, Seniors, and Social Development. The Collective Memories Project invites seniors to record their stories and memories for sharing.

The booklet launch is open to the public and will include light refreshments. There will be copies of the booklet available at the launch as well as a PDF version which will be placed online. For more information please go to www.collectivememories.ca or call Terra Barrett at 1-888-739-1892 ext. 5.

This week as part of the Collective Memories Project Dale, Kelly, and I travelled to Grand Falls-Windsor to meet with their heritage society. On the drive out we made a quick stop to the Old Mill in Glovertown. After learning a bit more about the site and the urban legend it has encouraged we wanted to take a look at the building itself. The mill is situated on a side road relatively close to the main road through town but if you didn’t know the mill was there you could bypass it completely. The abandoned mill is covered in graffiti from different decades with some graffiti referencing the red eyes urban legend. It was an interesting but eerie spot to visit and learn more about.
After our short detour we met up with the GFW Heritage Society in their office on High Street. This meeting was a follow up on the work I did in Grand Falls-Windsor in September on the memories and merchants of Main Street in Windsor. The photographs and interviews are being edited into a booklet for the community however the ICH Office also wanted to do something a little bit different so we met with the society to discuss the booklet launch and the possibility of doing a pop-up exhibition in the New Year. We tentatively decided on the last weekend in February for the launch and exhibit and are looking forward to the event!
While in the community we also completed an oral history interview with Brian Reid and photographed some of the artefacts housed by the society. We also returned digital copies of the Merchants of Main Street interviews which can be found online here. If your community has material you would like help digitized or would like to start an oral history project of your own feel free to contact terra@heritagefoundation.ca or call toll free 1-888-739-1892 ex. 5.

This weeks Folklore Photo comes from the Grand Falls-Windsor Heritage Society and is circa 1909.  The photo is of Goodyear Taxi Service located at the Grand Falls Station (Windsor).  This Taxi Service was operated by Josiah Goodyear and boasted 8-10 horse drawn “Victorias” with upholstered seats for passengers.  Roy Oldford of Grand Falls-Windsor remembered similar horse and carts being used by Stewart's to deliver groceries to the community in the 1950s.

This photo is one of the images from the Heritage Society which will be featured in an upcoming booklet on the merchants of Main Street based on oral history interviews completed in Windsor in September.  Tomorrow afternoon we are meeting with the Heritage Society to discuss a pop up exhibit to go along with launch of the booklet in the coming new year.

The booklet will focus on the merchants from the bigger well known stores such as Cohen's, Riff's, and Stewart's to the buses (or taxis) which lined Main Street and provided transportation between the towns of Windsor and Grand Falls. Several people described the buses which would run between Main Street in Windsor and High Street in Grand Falls and even delivered lunches to the mill workers.

Included below is a short audio clip from Roy Oldford who grew up in Windsor. In this clip Roy talks about the popularity of the buses and also tells a humorous story about using his friend's father's bus to earn a bit of pocket change when they were teenagers.