The Burgess Property is a collection of 6 buildings in Whiteway, NL, dating to the late 19th and early 20th centuries, and was designated a Registered Heritage Structure by the Heritage Foundation of Newfoundland and Labrador in 2020. Built and operated by an unbroken line of Burgess family members over six generations, the cluster of closely spaced buildings are part of a single family enterprise. Their continuity helps to imbue a sense of how the property was inhabited and operated for more than 100 years, and the diversity of buildings speaks to the variety of functions and income sources of outport family premises.

We visited the site yesterday, and are working with the Burgess family to document and better understand the history of the premises. Stay tuned for more info and photos on this group of structures in the weeks to come! 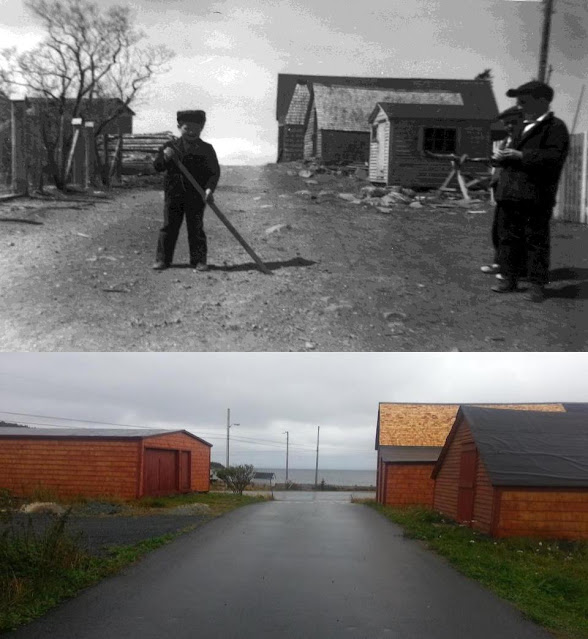 The Burgess Property in Whiteway, Trinity Bay, is a registered heritage property which has been passed down through 6 generations of the Burgess family. The property consists of 6 buildings each with buildings used their own distinct purpose. The diversity of the buildings used by the Burgess family speak to the diversified functions of outport life throughout the 19th and 20th centuries, and the different sources of income families accessed to make a living.

The Burgess family history certainly reflects a diversity of trades undertaken on the property. While many of the Burgess men were listed simply as fishermen in early censuses, there is strong evidence suggesting that Charles Burgess initially came over to Whiteway as a sailmaker, and later evidence suggests that the family was involved in shipbuilding at a nearby dockyard in addition to fishing and logging. Notably, the women of the Burgess family also played important and diverse economic roles in the family. Naomi Burgess, for example, was an active midwife and Jane Mave Burgess participated in the Labrador fishery in the early 1900s, and continued to impress young boys with her cod-splitting skills well into her '70s.

If you have a memory of the Burgess family or property, comment below or email research@heritagenl.ca
Posted by Katie at 9:00 AM No comments:

Whiteway - What's in a name?

If you try searching for the early history of the town of Whiteway, in South Trinity Bay on the Baccalieu Trail, you might be hard-pressed to find anything prior to the 20th century about the town. Instead, you’re more likely to come across information on Witless Bay, or a great deal of information on Sir William Vallance Whiteway (1828-1908) who was a member of Parliament for Trinity and Prime Minister of Newfoundland from 1873 to 1885, and again from 1889 to 1894.
This is because prior to the turn of the century Whiteway was actually known as Witless Bay, Trinity Bay - and prior to that, it was known as Witler’s Bay. How and when exactly Witler’s Bay turned into Witless Bay isn’t clear, but in saying the words aloud its easy to see they sound very similar, so it isn’t hard to see how they eventually got mixed up.
By the early 1900s, confusion between Witless Bay, Trinity Bay, and the present-day Witless Bay just south of St.John’s became an issue. Whiteway was renamed after the former Prime Minister, the longstanding representative for Trinity Bay and a notable historic figure, around the time of his death in 1908.
Posted by Dale Jarvis at 9:00 AM No comments: