From Pliny to Placentia Bay: The Folklore of Vinegar. #folklorethursday 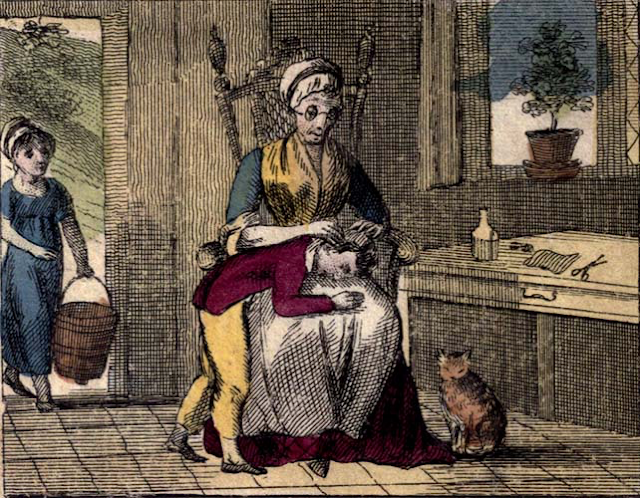 Jack and Jill went up the hill
To fetch a pail of water.
Jack fell down and broke his crown,
And Jill came tumbling after.

Up Jack got, and home did trot
Fast as he could caper,
He went to bed to mend his head,
With vinegar and brown paper.


The traditional “Jack and Jill” rhyme we learned as children dates back at least to the 1700s, and exists with a number of different verses and variations. What we are focussing on today is that second verse, with the reference to the vinegar plaster. An earlier version, noted in The Oxford Dictionary of Nursery Rhymes, goes:

Up Jack got, and home did trot
As fast as he could caper;
To old Dame Dob, who patched his nob
With vinegar and brown paper.


The idea of patching your nob with a vinegar plaster goes back a long way. Greek physician and botanist Pedanius Dioscorides (c. 40 – 90 AD) included vinegar in a cure for headaches in his five-volume De Materia Medica. Dioscorides was employed as a medic in the Roman army, so I suspect he knew a thing or two about bumps on the head (and hangovers, for that matter). The idea was supported by Pliny the Elder, who encouraged the use of a vinegar plaster as a cure for snakebite and scorpion stings. Vinegar as a headache cure persisted for a couple thousand years, ending up in children’s rhymes. Well into the modern era it was a common practice in areas without sophisticated medical care, and still survives as a home remedy today. In a 1946 article in Decks Awash, Victor Butler writes,


Many years ago when people lived in the harbours and coves of Placentia Bay, they were without medical assistance in time of sickness and accident. This was one of the prices liveyers had to pay for living in isolation. However, in all the communities first settled, there resided from one to three middle aged mothers who were skilled in administering to the needs of the sick and suffering. Some were more skilled than others in using the limited amount of available remedies to cope with the different ailments. In later years I have given much thought to how those very intelligent, although illiterate women, acquired the skill to use the different roots, leaves, barks and buds of trees and plants in a suitable manner to ease the pain and discomfort of people suffering from so many different ailments. The majority of settlers in the Bays and Harbours migrated to Newfoundland from England, Ireland, Scotland and the Channel Islands. They must have been aware of the different remedies mentioned and then passed the information along to their descendants.

Butler then goes on to list various traditional healing concoctions. Two of those involve vinegar:


7. White liniment —- Equal parts of spirits turpentine and white vinegar were combined with the whites and the shells of two eggs.

Today, we are more likely to use vinegar on our fish and chips. Even that custom has its own traditions and folklore.

According to a 1980 article by Susan Coen, the 1953 Avalon Telephone Company phone book had one listing under "Chip Service" for St. John’s -- Ron's Snack Bar, Lime Street. In an interview with Ron Martin, son of the original owner, Martin noted this about vinegar:


The vinegar, fast foods don't even think about vinegar. But vinegar is a very important thing to fish 'n chips. It's got to be brown and it's got to be mixed vinegar. Little packages of that white vinegar, we just don't even use on fish 'n chips. It sounds foolish, but it's a fact. Brown vinegar. I drink it. I actually drink it. Yeah. Every hour I usually have a handful of brown vinegar.

Today in St. John’s, a new generation of vinegar-makers is emerging. Janet Harron is the proprietress of Wild Mother Provisions, a food company specializing in artisanal vinegar and the traditional baked goods of Britain and Ireland. Harron currently sells at the St. John’s Farmer’s Market and her beer-based vinegar (technically alegar) is also available at Rocket Bakery and other retailers in downtown St. John’s.

“We are looking for stories about the use of vinegar in Newfoundland and Labrador,” Harron says. “For example, do you remember a vinegar plant in your house when you were growing up, a home-fermented vinegar made from toasted bread, molasses, yeast and water? What was it used for? Do you remember eating vinegar pie? Or a vinegar drink sweetened with molasses?”

Harron notes that this vinegar drink dates from the 18th century and is called “switchel” or "Haymakers’ Punch" in United States, not to be confused with Newfoundland and Labrador switchel, which refers to tea left boiling on the stove all day.

What are your vinegar memories, or pieces of vinegar folklore from your community? Did you have a vinegar plant? Let us know! Comment below or email ich@heritagefoundation.ca