Quick Reads in NL Vernacular Architecture: What is a Side Span? 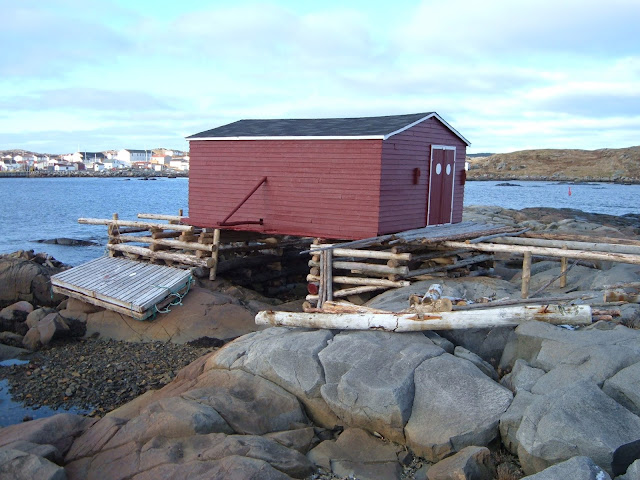 The sheer weight of curing fish could cause the outer walls of a fish stage to bulge outwards, or even collapse over time. This necessitated an architectural innovation called a side span. A side span is similar in function to a buttress on a stone building and consisted of a wooden exterior brace on the side of a stage. Regarding the stages of Tilting, Fogo Island, folklorist Gerald Pocius writes,

According to Dan Greene, many stages in the past had a "side span" for support. This brace kept the side of the stage from breaking out when a large amount of salted fish was stored inside. These were essentially timbers that spanned out past the normal plane of the flooring, and braced diagonally on the wallplate to counteract any pressure. According to Dan, the typical sixty foot stage had three of these spans on each side.

Above is a Tilting example, showing the side span on the Michael Greene Stage (photo credit: Heritage NL).

For more on side spans, read the full article in our November 2020 "Heritage Update" newsletter.

On Tuesday, June 4, I headed out to New Perlican, Trinity Bay with Dale, our new summer student Rachael, and two professors in the folklore department. We were taking Dr. Jillian Gould, and Dr. Kelley Totten from Memorial University's Folklore Department to meet with members of the community in order to explore future partnerships between the heritage committee and the folklore department.

Our first stop was the town hall where we met with four members of Heritage New Perlican to talk about the possibility of the two groups working together on a future folklore field school. After our formal meeting we explored the community with a stop in St. Augustine's Anglican Church. This church was built in 1927 and is set to be deconsecrated this month.

Our next stop was one of the colourful stages that dot the harbour of New Perlican. Ches Peddle, who showed us around his stage, grew up and lives in Vitters Cove, New Perlican. He worked on boats, and spent time in the north with the Hudson Bay Company. Ches also builds boats, and each summer he places a flag on the local landmark, Peter's Finger. Ches took us through his stage, explained the different fishing gear, and pointed out who built some of the boats, and stages in the harbour.

We made a quick stop in St. Mark's Anglican Cemetery. This cemetery was part of a clean up project in 2017. The project was another partnership with Heritage New Perlican, and Memorial University. We also stopped to see a lone grave from 1816 which is located on private property. Our last stop of the day was stop at Ron Peddle's and the St. Augustine Anglican Cemetery as no trip to New Perlican is complete without goats. Unfortunately we didn't see any cemetery goats! We did however see little Bella, who is a pet pygmy goat owned by a community member. 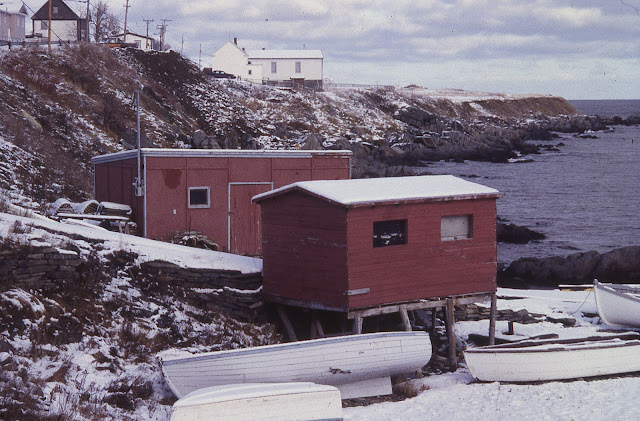 Fishing stages in Freshwater, Conception Bay. This photograph was taken in 1995 and is part of the slide collection of the Baccalieu Trail Heritage Corporation.
Posted by Kelly Drover at 8:30 AM No comments: