Bristol's Hope and the Salmon of Knowledge 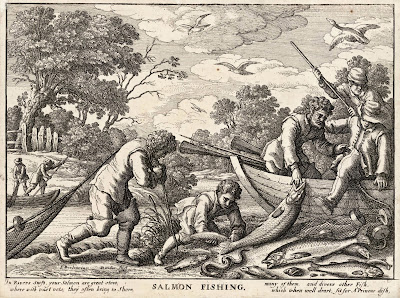 There is an old Irish story about the Salmon of Knowledge. According to the legend, an ordinary salmon ate nine hazelnuts that fell into the Well of Wisdom from the nine hazel trees that surrounded the well. Because of this, the salmon gained all the world's knowledge, and it was said that the first person to eat its flesh would, in turn, gain this knowledge.

A young Finn McCool, destined to become a great leader and warrior, was sent to study under the wise man Finnegas, who had spent years trying to catch the salmon. Not long after Finn came to him, Finnegas caught the salmon, and ordered Finn to cook it, but not to eat any of it. As Finn cooked it, it burned his fingers, so he put his thumb into his mouth to ease the pain. In this way, Finn acquired all the wisdom of the world, and not old Finnegas.  In a story from Wales, the famed poet Taliesin received his wisdom in a similar way.

I drove home tonight from Bristol's Hope, thinking about those old tales, of Finn McCool, of Taliesin, and of Ida Skinner.

I was in Bristol's Hope to help out with the start of an oral history project. The local heritage committee is working on a few projects which I've mentioned here before. Tonight, I met with Richard Johnson and Don Skinner, to get them started on their interviewing techniques.

Don's mother, Mrs. Ida Skinner, was our "test subject" tonight, and I showed the men how to do a folklore interview by having a fabulous chat with Ida, which ranged from her early memories of growing up at the Point in Bristol's Hope, her family's fishing business, the raising of sheep, of carding and spinning, schooldays and recess games at the old one-room schoolhouse, and of holidays and charming away warts.

At the end of our conversation, Richard asked Mrs. Skinner to pick one thing she would bring back from her early years in the community if she could.

"We used to be as one," she said, without pausing to think. It was something she had mentioned at a few points throughout our conversation, noting that in her youth, the entire community, Protestants and Roman Catholics alike, had worked together for clearing snow along the road in winter, to provide education for the children of the community, and in making sure everyone had food to eat.

"We used to be as one," she said. And then she told a story.

Mrs. Skinner's father and her two older brothers had been successful fishermen, who had invested their earnings in a larger boat, and who sold their catch for export to the Moores family in Carbonear.

During salmon season, her family, and other men in Bristol's Hope would set their traps and catch whatever salmon they could. As the salmon season progressed, the number of salmon turning up in the traps would decrease. It was then that her father and the other men did something that stuck in her memory. They would take that year's last catch of salmon, and distribute it to every household in the community that didn't have a salmon trap. Everyone got salmon, not just the men who had worked for it and who would profit from the selling of it, but every single family in Bristol's Hope.

And it is that sense of fairness, compassion and community that Mrs. Skinner would pick to bring forward into today's world. It seems like a wise idea to me.