In March, I digitized a series of cassette tape interviews from Admiralty House Museum and Archives. One of the interviews recently added to the Mount Pearl section of MUN's DAI was an interview with Harold Squires, a wireless operator who worked for the Marconi Company and traveled to the Antarctic on the S.S. Eagle. In the interview, Squires talks about life on the ship, his job, the other crew members, and his nickname "Sparks", One of the interesting stories Squires tells about the voyage, was how when the ship warmed up, the deck on the old sealing vessel oozed seal blubber. Squires also talks about working as a wireless operator at Cabot Tower and having to walk to work everyday.

To listen to this, and other interviews about Mount Pearl and the early days of radio in Newfoundland and Labrador, visit Memorial University Digital Archives Initiative.
Posted by Kelly Drover at 8:50 AM No comments: 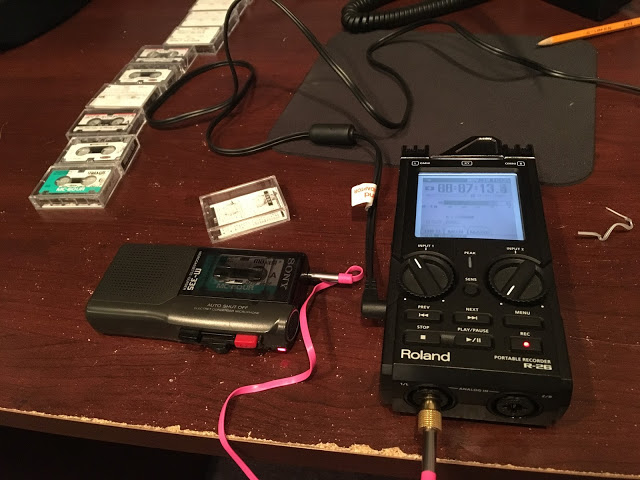 One of the recent additions to the MUN Digital Archives, is a collection of audio interviews from the Admiralty House Communications Museum. The recordings can be divided into two different groupings, those conducted in 1990's and the early 2000's. The later interviews focus mainly on the development of Mount Pearl. We hear Don Hutchen's talks about the Lester Family History and the property that developed into Mount Pearl. Betty Thistle shares memories about spending summers in the area in the 1930's at her family summer home. Multiple interviews talk with residents who grew up in other communities and moved to Mount Pearl in the 1940's and 50's when it was just developing. They talk about what was available to the early residents, the roads, shops, and the lack of crime. Two interviews, with John Fuller and Frank Kennedy, talk about the SS Florizel. Steve Best talks about his experiences working with the railway, and Harold Squires talks about his work as a Marconi Operator.

The older interviews were conducted in the early 1990's by researcher and author Hector K.Swain. Swains interviews focus on the history of radio broadcasting in Newfoundland and Labrador, talking to important names in radio such as Joseph V. Butler, Oscar Hierlihy, Rab Carnell, Paul O'Neil, Michael Harrington, and others. The interviews talk about how different radio stations were set up, significant programs like "The Barrelman", religious broadcasting, and the social welfare effects of radio in the province.

Check out these interviews and others at the MUN Digital Archives

~ Kelly
Posted by Kelly Drover at 8:50 AM No comments: 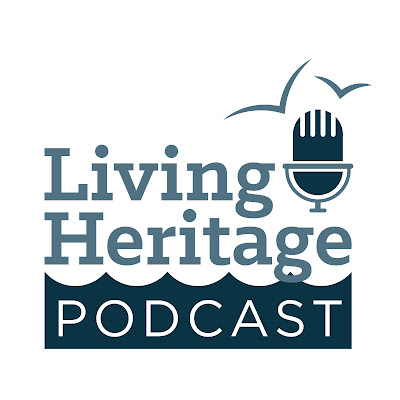 It is official! The new Living Heritage Podcast is up and running, and ready for a listen!

Living Heritage is about people who are engaged in the heritage and culture sector, from museum professionals and archivists, to tradition bearers and craftspeople - all those who keep heritage alive at the community level. We talk about their work, their passions, and the day-to-day safeguarding of culture and tradition.

Christine LeGrow is the owner of Spindrift Handknits. Christine was born and raised here and has a keen interest in the people, places and things that make this island of Newfoundland unique. In this interview, Christine talks about learning knitting skills, traditions related to craft, patterns, socks and trigger mitts, sources of wool, and her wishes for the future of heritage in Newfoundland.

###
The Living Heritage Podcast is about people who are engaged in the heritage and culture sector, from museum professionals and archivists, to tradition bearers and craftspeople - all those who keep history alive at the community level.
The show is a partnership between HeritageNL and CHMR Radio. Theme music is Rythme Gitan by Latché Swing.

Tune in this Sunday July 20th to the Weekend Arts Magazine (WAM) hosted by Angela Antle for an interview with the Heritage Foundation’s summer intern Terra Barrett.  The interview will air at 7:50am Newfoundland Time on CBC’s Radio One and online at http://www.cbc.ca/player/Radio/.  If you have any memories of growing up in Petty Harbour or the social life within the community please contact Terra at terra@heritagefoundation.ca or (709)739-1892 extension 5.
Posted by Terra Barrett at 10:33 AM No comments:

A Call for the Brokenhearted - guest post by Annie McEwen


It will be two years this August since I had my heart broken. My boyfriend came home from a summer away and without warning told me he was through, packed up all his things, including the bed we shared, and drove away from an exceptionally solid, three-year relationship. I remember the first thing I did after he left was hurl a heavy roll of duct tape as hard as I could across the room, making a giant dent in the wall. Our wall. No, wait.

I had never been so confused, so lost. In the preceding three years I had often been soothed by the firm belief that even if I had no idea where my career was going, or where I wanted to live, or who I wanted to be, at least I could count on the fact that he would be there. He had been my anchor, and when he cut free, I felt the great violent heave of the world around me. And I was terrified.

My instinct was to armour myself so no one would ever be able to hurt me like that again. For months I worked to add layers to a thick shell I could curl up inside to keep myself safe. I saw no way out and wanted no way out.

But slowly, somehow without me even noticing, one of the worst things that had ever happened to me started to become one of the most interesting, the most life-giving. I began to connect more deeply with those around me who had had similar experiences. I began to recognize how extraordinarily brave it was to have one's heart open enough to be damaged by another. And I began to realize that losing my anchor and having my heart broken might just be a precious gift.

I'm sharing my story with you because I would like to hear yours. I have recently been awarded a grant from the Newfoundland and Labrador Arts Council to make a radio documentary about broken hearts. I'm interested in your stories about the rotten end of love, the death of desire, the loss of a loved one—and how these experiences changed you. What is your life like post-heartbreak? Who have you become? What happens when a soul loses that by which it is defined? What do we do with the energy we once invested so heavily in another?

I am looking for willing participants, those ready to speak honestly and bravely about their experiences with heartbreak. Your experience does not have to, like mine, have been a life-giving one. Perhaps you are still curled up in your hard shell. Or perhaps you never felt the need to build a shell in the first place.

Jonathan Goldstein, writer and producer of the CBC Radio show Wiretap, once wrote (here— http://transom.org/?p=7028), “The eyes are not the window to the soul. The radio is.” I've chosen the medium of radio to explore this topic because I have learned that stories matter, indeed, they are at the heart of all things, and that nothing captures human life more intimately than the voice.

If this sounds like something you'd like to be a part of, please send me an email at annierosamcewen@gmail.com. I look forward to hearing your stories.

Posted by Dale Jarvis at 1:31 PM No comments:

This Friday, CBC Radio Noon with host Ramona Dearing will be all about the old-fashioned yet timeless tradition of recitations! Local author and recitationist Dave Paddon will be in studio doing a couple of his incredibly witty pieces. And they want to hear from you, too! Phone in at 709-722-7111 / 1-800-563-8255