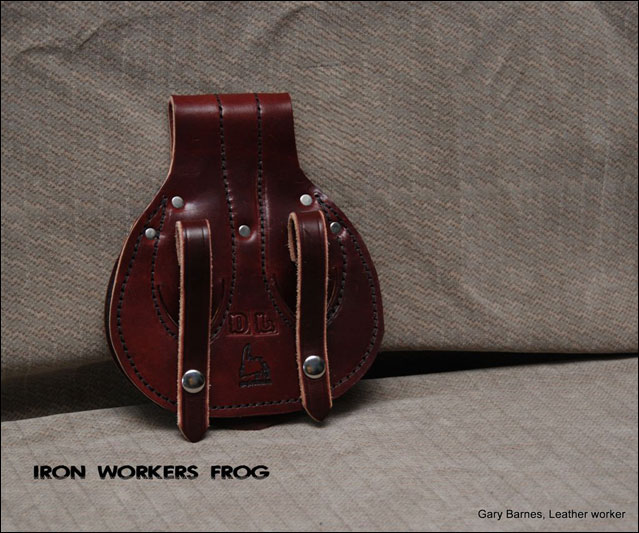 In 2012, Nicole Penney and I conducted some research around Newfoundlanders who worked high steel.

One of the intriguing people we met as part of the project was Gary Barnes, a leatherworker and harness maker, who makes leatherwork for those working high steel.

In this interview, Gary Barnes discusses making leather works for high steel such as harnesses, frogs, and belts. Listen to the interview here or visit Gary's website here and check out his work.

In the second week of September Dale, Heather, and I spent several days in Cupids with the new folklore students. Each year Memorial University's Department of Folklore holds an intensive three-week field school for the incoming MA and PhD students to focus on fieldwork techniques. This year the students were in the community of Cupids, Conception Bay North and they focused on occupational or workplace folklore.
During the students' first week in Cupids, Dale spent two days teaching them interview techniques, showing them the basics of working with recording equipment, and doing a staged interview. I also gave a short presentation with suggestions of how to use the material collected in oral history interviews for blogs, articles, audio and video clips, booklets, etc.
Heather and I also joined the students in class to learn more about fieldwork techniques and how to take better field notes with folklorist Bonnie Sunstein. Bonnie teaches nonfiction writing and ethnographic research at the University of Iowa and gave the students a presentation on how to take field notes and how to work with the field notes taken to produce a piece of data that can be used in future writing. She stressed the need to be descriptive and suggested the students do double entry notes - using one side to describe the situation and the other to describe their feelings and reactions to the situation.

After the students classes in research, writing, and field techniques they went out into the field and conducted their own interviews and research. This Thursday September 29 the students will be presenting their research results to the community. This event is open to the public and everyone is invited to come out and learn more about work in Cupids!

During my interviews in Petty Harbour-Maddox Cove I have come across several folk beliefs particularly beliefs about being on the water. From whistling up a wind to not being able to turn your boat against the sun there have been a number of interesting folk beliefs shared.

As previously mentioned on the blog Petty Harbour resident Ann Payne described being warned not to cross the river at night when it was easiest to be fairy led. Ann and her mother Annie Lee explained a story about Ann’s uncle whose leg was broken by fairies and who was held in the water of the Petty Harbour river for four hours. Other members of the community have also mentioned fairy beliefs such as being warned to keep a piece of bread in their pocket for the fairies when walking through the woods.

Gertrude Walsh of Petty Harbour explained that if a bird pecked at the window it was an omen of a death to come. Another warning of upcoming death is three knocks at the window. Gertrude explained that she heard three knocks at a second floor window and when she woke the next morning she received a phone call that her brother had died in the night.

A couple of people have mentioned having to have the gang boards facing the right direction while in a fishing boat. Gordy Doyle explains this belief:

The boards, the pound boards that you have right? To cover up your fish, to put your fish in pounds according to the size of the boat. You would never have them up right? You would have them painted and the opposite side would be painted a different colour. You would never have them turned over in the boat. You just don’t do that. And I’m not superstitious at all but it’s just something that I don’t do and I if I see it turned over [I’ll say] “No b’ys turn the gang board back over”.
Another belief about being on the water was not cursing in a boat and not whistling in a boat. It has been said if you whistled in a boat you could whistle up a storm. Jack Walsh described why he will never forget why people are not allowed to whistle in a boat:

I can remember one time this man, and myself and his son we used to knock around together. So we were going out to the cod trap this evening in the boat. Two of us were sat down and we were only young, you know. Not old enough to go fishing or anything but just going for a run with the men and we were sat down in the boat and we were going along. It was a make and break motor then they called it and I don’t remember which one of us started to whistle and we knew nothing until down came the big stick and hit the boards between the two of us and he shouted don’t dare whistle in this boat he said, whistle up a storm.

Mike Hearn explained a number of folk beliefs including fishermen being sure to follow the sun with their boats rather than turn against the sun and people being wary of walking under a ladder as these actions would bring about bad luck. Mike explains what a fisherman’s beliefs about jinkers and what a jinker is:

If he had a small fish, a tomcod, one got left in the boat and all the fish is out of her. And he got up the next morning to go fishing and saw one of them there it would be a job to get him to go out. That was a jinker. They called leaving a fish in the boat like that a jinker. Bad, bad thing to do.

Mike also went on to explain he didn’t share this belief about jinkers and described an incident where his fishing crew had a jinker left in the boat for days and were hauling in loads of fish every day. They only noticed the jinker because of the smell but the crew joked that they should put one on the other side as they were getting such large loads of fish with the jinker in the boat.

Do you have any folk beliefs? Beliefs about being on the water? What are they? Share your stories below – we’d love to hear them!
Posted by Terra Barrett at 11:26 AM 2 comments:

Today's folklore photo is actually a collection of photos from the past week.  It has been a busy week with the Heritage Foundation.  Last Tuesday was the cemetery clean-up and since then I've been kept busy with interviews!

On Wednesday I interviewed Ron Doyle about growing up in Petty Harbour, the changes it has seen and the influence of music on his life and in the community.  Ron described the musical influence of his family and in particular his father, the recitations and songs they would perform and how he began playing at community concerts, formed a band and all the good that came out of the concerts.

Thursday I had two interviews.  The first interview in the morning was with Gordy Doyle and focused on growing up in Petty Harbour, working as a fisherman, the changes in the equipment and methods of fishing and the stories and practical jokes that come with the job.  Gordy also touched on the camaraderie between fisher people and how they would support one another when launching boats and gather together in the twine stores to work and talk.

Thursday afternoon I met Cyril Whitten in his cottage in Saint Luke's.  Cyril's friends stopped in to
have a boil up and put some freshly caught lobsters on the stove.  Cyril and I discussed his life in Petty Harbour, the games he played as a child, his memories of the community concerts, fishing in the community and his time as Mayor.  Cyril contacted me and said he would like to meet again and said he had much more to say about Petty Harbour.  I'm looking forward to interviewing Cyril again this week.

In true Newfoundland hospitality I was invited to stay for a feed of lobster with Cyril and his friends' Dennis Madden, Peter Squires, Richard Murphy and his cousin Muriel Andrews.  When I left they insisted I take a meal of freshly caught and cooked lobster home with me.  This was definitely a highlight of my week and a great example of Newfoundlander's warmth and generosity.

Monday's interview was with Betty Cheeseman and Betty had vivid memories of her time in Petty
Harbour.  Betty described growing up in a musical family with a mother who played the accordion and a father who danced.  She also described being in the community plays, listening to the concerts and the intensity of the card games played in the community.

I'm looking forward to meeting and interviewing more people from Petty Harbour as well as working on the interviews I have already completed. The interviews need tape logs and all the necessary metadata so they can be published on MUN's DAI. If you have memories of growing up in Petty Harbour please contact me at terra@heritagefoundation.ca or (709) 739-1892.

Posted by Terra Barrett at 11:36 AM No comments:

Sadly, a construction worker recently fell 80 feet to his death while working on the new Fortis office building on Springdale Street in St. John's, just behind the ICH office. Below are some photos of the spontaneous memorials that popped up within a day or two.

Spontaneous memorials are a first reaction to the unanticipated, unexpected and violent loss of life. Most spontaneous memorials start within hours of death notification; someone leaves a candle or bouquet of flowers, which is often followed quickly by contributions from others. They can be the limited, personal expression of the family and friends who place flowers, candles, stuffed animals, and notes on a tree by the roadside where a fatal accident occurred, or occur on a global level. 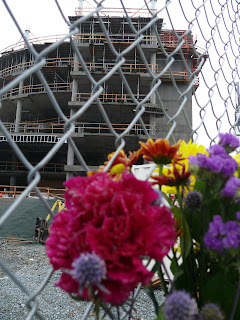 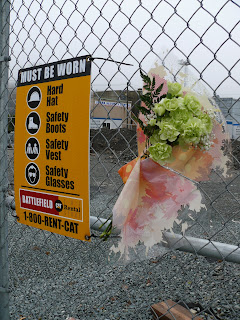 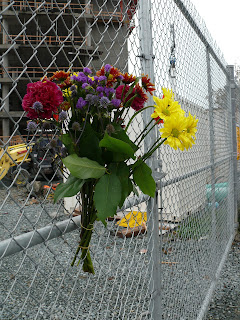 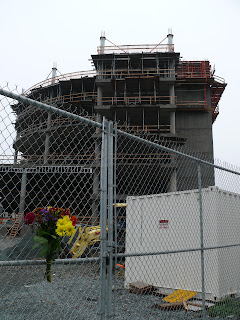 Posted by Nicole Penney at 5:16 PM No comments: 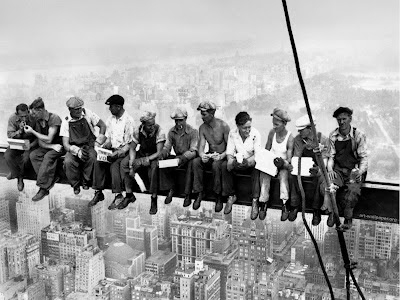 This famous photo, Lunch atop a Skyscraper, was taken by Charles Ebbets on September 29, 1932 on the 69th floor of the RCA Building in New York during the last months of its construction. Various names have been suggested for the men in the photo, with the third man from the left having been possibly identified as Austin Lawton of King's Cove, and the fifth as Claude Stagg of Catalina.

On November 14th of this year, The Rooms museum and the Heritage Foundation of Newfoundland and Labrador is looking at presenting a live, informal talk-show style interview in the Rooms theatre on Newfoundlanders working on high steel, past and present.

Right now, I am looking for a couple people with good memories of working high steel, who might represent different generations of workers. If you know of someone who might be up for a conversation with me (Dale Jarvis) about the topic, you can call me at 739-1892 ext 2, or email me at ich@heritagefoundation.ca

For more on the work of Newfoundlanders working High Steel in New York and other places, check the documentary by CBC's Curtis Rumbolt: Men of Iron.