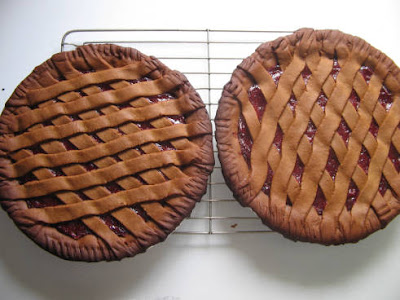 Posted by Katie Harvey at 9:39 AM No comments:

Unfortunately we're in the thick of cold and flu season. It's that wonderful time of year when everyone around you seems to be coming down with something gross and mucusy. The thought of even touching a public handrail or door knob feels tantamount to licking the floor of a public restroom. Riding a packed elevator or bus is just asking for trouble.

While having a chat today with my grandmother, who is "stuffed up as anything", I asked her about old folk remedies for colds. She described a cough drop her mother made from molasses and a bit of kerosene. Her mother would boil molasses with a few drops of kerosene until the mix was very thick. She then let it cool and cut it into pieces. My grandmother loved having this lozenge, because as she said, "it was like candy, and we didn't get candy very much back then." 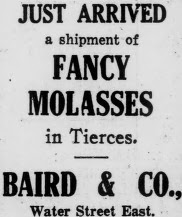 My co-worker, Lisa Wilson, is currently conducting a series of oral histories with community members from the Bay Roberts area. The topic of home remedies came up in an interview with Alice Mercer, age 95, of Clarke's Beach:

I got a cold. I wasn't very old. I must have been a year old, and my grandmother, my dad’s mother was living with us at that time, and she said to my mother, 'Elsie, she’s going to die anyhow, she’s going to choke with that cold on her chest she’s got. So, can I try an old time remedy?' And she said, 'I don’t care what you try as long as you save her.' So she mixed up molasses and a little tiny drop of kerosene oil from the lamp, because in them days they used lamps to light the houses. Just a drop or two in the drop of molasses, and boiled it, and when it cooled, gave me a taste. And mom said I was no time getting better when that got down in my stomach. - Alice Mercer, Clarke's Beach 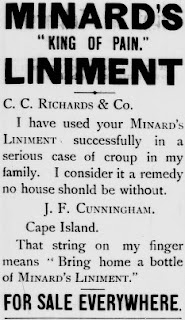 There are several variations of this recipe for cough drops, another of which includes Minard’s Liniment and ginger.  One aspect always stays consistent though- anyone who used this home remedy absolutely swears by it!

Posted by Nicole Penney at 4:46 PM No comments: