Today's Folklore Photos come from St. Anthony collection on Memorial University's Digital Archives Initiative. St. Anthony is located on the northeastern tip of Newfoundland's Great Northern Peninsula. This site was first given the name of 'St. Anthony Haven' in 1532, for the way in which the area operated as a safe landing point for fishing fleets. The region was initially settled based on the fact that there were rich cod fishing grounds in the vicinity, a move that helped to establish a productive fishery that would last for several centuries. Despite the eventual collapse of the cod fishery, St. Anthony has had many development successes, making it a vital service center for residents of the broader GNP region.

Another important feature of St. Anthony is the community's historic affiliation with the legacy of Dr. Grenfell. Wilfred Thomason Grenfell (1865-1940) - a British doctor-arrived in St. Anthony in 1892 as a medical missionary, sent by The Royal National Mission to Deep Sea Fishermen. Within a year of his arrival, Dr. Grenfell commenced building a medical system that eventually grew to serve the regions of Northern Newfoundland and Labrador. As his medical mission grew, his mandate expanded to include the development of schools, cooperatives, industrial work projects, an orphanage, and other social programs. One such program involved utilizing local textile-based craft skills to help sustain the region's economy. Grenfell style embroidered coats and hooked rugs with Grenfell inspired designs are being produced by residents of the Great Northern Peninsula to this day. These objects are now referred to as being a part of the 'Grenfell tradition' and can be seen and purchased at Grenfell Handicrafts, located in St. Anthony.

The St. Anthony inventory is part of a founding collection for the Great Northern Peninsula Textiles Archive and Learning Center. This project, based in Conche, NL, is an on-going initiative to document and preserve the textile-based crafts that are being created on Newfoundland's Northern Peninsula. The items in this collection were gathered between May and July of 2010 and include photographs of textile craft objects such as patchwork quilts, knitted items, and Grenfell-style hooked rugs. This inventory also includes audio clips of craftspeople discussing their particular textile-based skills and practices.

If you want to learn more about this collection click here and if you want to listen to an interview with Ruth Pilgrim about rug-hooking, knitting, painting, quilting, cross-stitching, and crocheting click here.

Posted by Terra Barrett at 8:00 AM No comments: 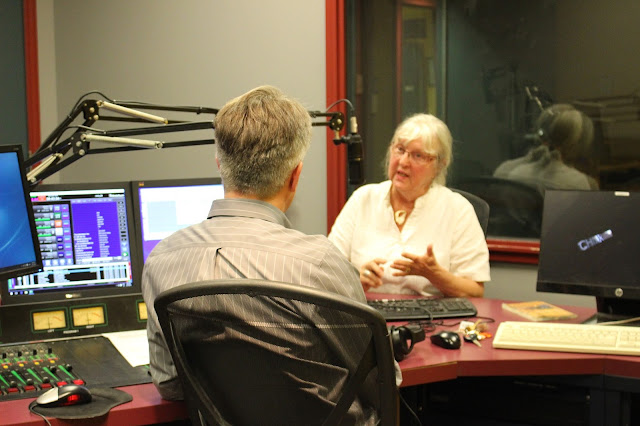 Ruth has been a mat maker since 1995. She works primarily with wool yarn to create mats which capture Newfoundland and Labrador past and present especially as it relates to her connections to places throughout the province. Though her works vary in size, Ruth particularly likes large scale mats. Some of her larger pieces include Portugal Cove c1920, Quidi Vidi c1900, the Battery c1960 as well as modern day Quirpon and Fortune. Her works have been exhibited at the Battle Harbour National Historic Site of Canada, the Arts and Letters Competition, the Bonavista North Museum Gallery, the Kildevil Fair and Auntie Crae’s. Ruth and her work have also appeared in a Parks Canada promotional video. Her works hang in private collections across Canada. She has taught mat making for the Provincial Museum, the provincial Youth Heritage Forum and to private students.

In this episode of the Living Heritage Podcast, Ruth talks with folklorist Dale Jarvis about her introduction to mat making, explains the process being making a hooked mat and the materials involved, different styles of designs, the role of place, family, memory and history in her work, and the differences between hooked and poked mats, with some comments on braided mats.

Listen on the Digital Archive:
http://collections.mun.ca/cdm/singleitem/collection/ich_oral/id/697/rec/1 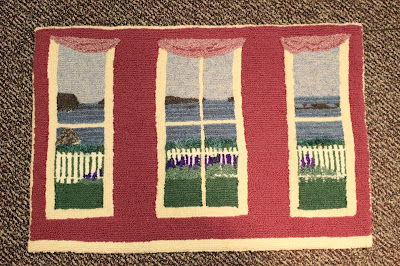 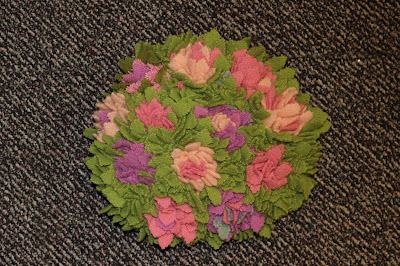 An afternoon with hookers 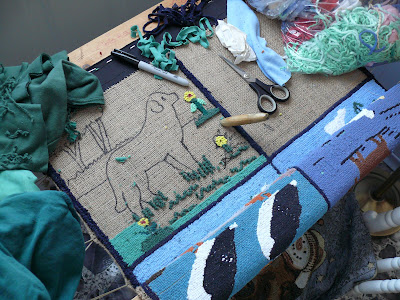 On Wednesday, March 11th, I spent the afternoon with 47 hookers.

“Tea… With Hookers!” was an event sponsored by the Intangible Cultural Heritage program of the Heritage Foundation of NL, which saw a room full of rug and matt hookers come together to listen to three of their own discuss the history, craft, art and changing tradition of rug hooking.

The event was held at the Red Mantle Lodge in Shoal Brook, Gros Morne National Park, and was organized by Corner Brook-based folklorist Sandra Wheeler. A seasonal Parks Canada employee in the region, Sandra is a board member of HFNL, and is currently working on a documentary film about rug hooking.

The event took the form of a staged interview, where Sandra introduced everyone, and I gave a brief overview of the province’s ICH strategy. Following that, I interviewed three women: Molly White, Rose Dewhirst and Florence Crocker. Of the three women, Florence was the one who had been involved in the tradition the longest, having grown up at a time when hooking mats was still a functional craft. Both Molly and Rose learned the art more recently, and shared their experiences about what they saw as a tradition that has undergone a fundamental change from craft that produced functional pieces of furnishing for the floor, to an art that produces objects to be viewed on the wall.

Posted by Dale Jarvis at 2:38 PM No comments:

The Naked Man and a Bunch of Hookers: Two ICH Events

It is not nearly so shocking as it sounds, I swear! We've got two exciting (and PG-rated) intangible cultural heritage events coming up this March, in Clarenville and Shoal Brook.

At this year’s event, we will present our proposed historic map project! Why not come out, help us identify unique place names, and enjoy an entertaining evening with storyteller, Dale Jarvis. Come and find out what Intangible Cultural Heritage is all about and discover why place names are so important. For example, you probably know where Manitoba Drive is located, but have you ever wondered why it's called Manitoba Drive? How about Mills Siding - what exactly is a 'siding' anyway? Do you know where Red Beach is? Stanley Park? How about Sally Hunt's Hole, the Naked Man or Iron Latch Gate Road? Names often bear significance to past events and/or stories within a community. The Clarenville Heritage Society is currently working to identify some of these older place names with the intention of developing a historic map. In the process, we are hoping to learn some of the unique stories that helped shape our community. So… what's in a name? Clues to the past! If you know of a unique place name that's in danger of being lost or that has an interesting story attached to it, we’d love to hear from you! . Refreshments will be served. 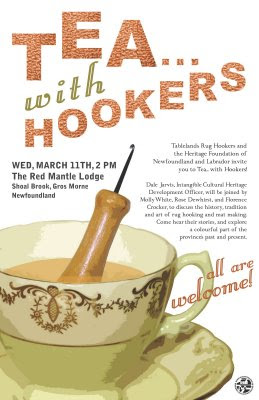 Tea... with Hookers!
Wed, 11 March, 2pm
Red Mantle Lodge, Shoal Brook
The Tablelands Rug Hookers and the Heritage Foundation of Newfoundland and Labrador invite you to Tea... with Hookers! The Red Mantle Lodge Shoal Brook, Gros Morne, Newfoundland Wed, March 11th, at 2 p.m. Provincial folklorist Dale Jarvis will be joined by Molly White, Rose Dewhirst, and Florence Crocker, to discuss the history, tradition and art of rug hooking and mat making. Come hear their stories, and explore this colourful part of the province's past and present. Everyone is welcome
Posted by Dale Jarvis at 2:09 PM No comments:

Back in August, I blogged about the possibility of using a USB footpedal and transcription software for doing transcriptions of digital material. You can read that blog post here

I found several online sources for the Infinity USB foot control, which I ended up purchasing through www.PCDictate.com. It retails for $58.50USD plus shipping (and plus another charge at customs) which brought it to around roughly $100CAD or so. I could find only one retailer locally, who did not have it in stock, though it was roughly the same price as having one shippped to Newfoundland from PCDictate.

The unit is pretty basic: three pedals and a USB cable. The pedal unit comes with no software of its own, so I installed the free PC Express Scribe Transcription Playback Software from NCH Software. Instructions for configuring the foot pedal using a handy installation wizard can be found on the NCH website.

Plugged in, and software installed, click Options/File Type to set the software to play whatever digital file type you need (I used MP3 for my test), then click the LOAD button on the software to load in your file.

I loaded in a copy of the interview I did with Red Bay, Labrador resident Alice Moores, who I blogged about here and whose interview you can listen to here. I opened up MS Word, and then transcribed a short bit of the interview, as follows:

DALE JARVIS: When your mother hooked rugs, what did she use them for?

ALICE MOORES: Traditionally rugs were hooked for the Grenfell mission, and most of the rugs that she did, she did for that, but they also did rugs that they put on the floor as well, just rugs to throw down around. Mostly what I would see my mother make is poked mats.

DJ: OK, so what is the difference?

AM: Well, those two types of mats are very fine as you can see. [ALICE INDICATES MATS SHE HAD PRESENT DURING THE INTERVIEW]. The traditional Grenfell mat is hooked with a silk material, or t-shirts or whatever they could find, but the poked mat was just large pieces of rag poked through large holes in large brin. So they would just take a hook which didn’t have the hook on the top, but was just straight, and they would poke the piece of material through the hole, so that it was tight. It wouldn’t come back, but it would have long pieces of rag on the top. And so that, they would throw on the floor. But those here were more used, or more hooked to be used as displays, or people put it on their chests, or things like that. Sometimes it was used on the floors but not often.

DJ: And where would people get the brin?

AM: The brin I guess was found… I’m not sure where they would find the brin, back then. I guess it was potato sacks and some of it, well, first when the mats were being made it came about because of Sir Wilfred Grenfell, who thought it would be a good way for the women to add to the income of the household, because the men were doing what they could with the fishing, and he found that this was a way that the women could, in the beginning, get clothes for their children. Because what was happening was, people were very poor and it was very difficult to be able to get things for their families. So they would do the mats for Sir Wilfred Grenfell and the Grenfell Mission and in turn they would send in clothes and different things the women could use for their children. Now a little bit later they started to get paid for them. And so he would send in materials and probably in the beginning he was sending in the brin as well, but then as time went on they probably used potato sacks and they would wash those out and clean them up, and they would use that.

All in all, a very handy combination of tools for anyone transcribing oral history/intangible cultural history interviews. One note: you do NOT need the foot pedal to use the software. You can load a file into the software, and then use hotkeys in place of the footpedals (F9 for play, F4 for stop, etc). For researchers and students on a budget, you can simply use the software without having to purchase a foot pedal, though for longer transcriptions, I can see where the foot pedal is useful. I got the hang of it very quickly, and know I'll be using it for interviews. The NCH transcription software runs in the background as you type, so you can use whatever word processing/blogging/email software you want to enter your transcriptions into.