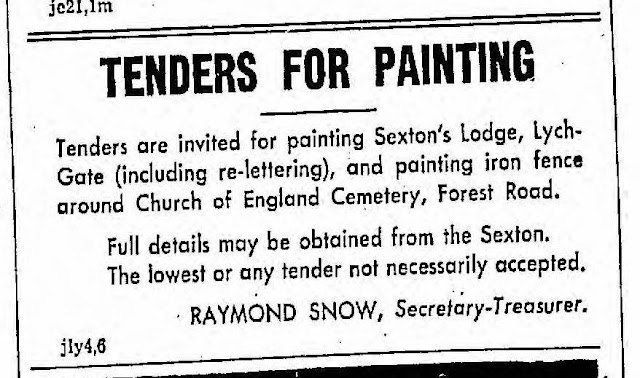 Yes, I've blogged before about my ongoing obsession with lych gates (read back if you dare).  I continue to find new pieces of information about this little-known NL tradition.

A lych gate is, as the Evening Telegram told us in 1922, "a churchyard gate, with a roof over it, under which, on the occasion of a funeral, the corpse and its bearers may await the coming of the officiating minister."

Well, I've got a few more gems from the Digital Archives Initiative. First up, above, is an advertisement that was run in The Daily News (St. John's, N.L.), 1955-07-06 page 16. I've written about this particular gate and its lettering here.  I still haven't figure out what the lettering says, so email dale@heritagenl.ca if you have ideas.

Next up, two notices about flower services at the same cemetery.

This adds a little bit to my understanding of the uses of the lych gates. While used primarily for part of the funeral service, they were also used in some English churches as part of informal post-wedding rituals, and these clippings indicate they were used, at least in St. John's, as a spot for collecting funds during flower services. Note that the 1921 article refers to this as the "usual collection at the lych gate" which suggests to me that this was a recurring practice.

As always, if you have any memories (or even better, photographs) of any of the NL lych gates, let me know! So far, I know of only four: Bonavista and Corner Brook (extant) and St. John's and New Perlican (demolished). 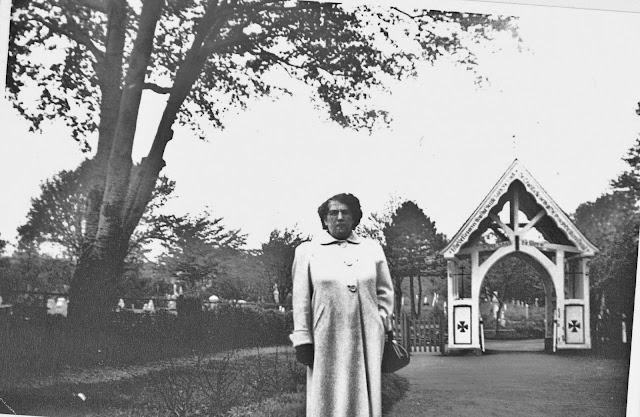 Followers of the ICH Blog may remember that I have been interested in lych gates, a very specific type of gate that was found at the entrance of Anglican churchyards and cemeteries. You can read more about the history of lych gates in the Occasional Paper #004.

In it, I talk about one of the province's vanished lych gates, the one which once stood in the Forest Road Cemetery.  I knew it had existed, and it is clearly shown on aerial photos and insurance maps, but I had never seen the building before.

Thanks to some detective work by Professor Frederick R. Smith, and the kindness of Mr. Arthur King, we now have this photographic gem - a photo of the gate before its demolition, likely taken sometime circa 1950-1952.

The lych gate is very similar to English examples, and has some similarities to the rebuilt lych gate at Bonavista. It features a sharply gabled roof, with slight bellcurved eaves, Maltese cross motifs, and at least two painted inscriptions, though the photo is just out of focus enough to make it difficult to identify the scripture being quoted (the word "resurrection" seems to be the second word). The woman in the photo is a Mrs. Butt, of the nearby Collier's Lane.

Here are some old Forest Road Cemetery photos I scanned from originals supplied by Mrs. Barbara Fry (Heale), a daughter of Victor Heale, caretaker circa 1948-59 . The family lived in the caretaker house on the cemetery. Photos of the entrance gate and old chapel are included. A daughter Elizabeth Heale, shown in the photo, was born in 1942---the photo with her was probably taken between 1950-52. The age of the old chapel photo is uncertain, but probably much before that time---it probably was taken by a commercial photographer such as Holloway as there is an inscription which was his style. 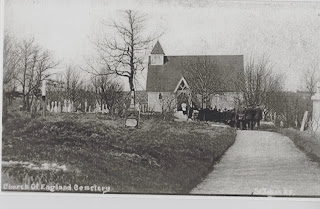 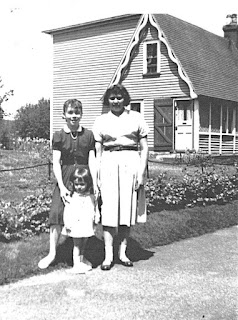 The Church of England Mortuary Chapel photo was said to have come from "The Archives" -- we are uncertain which one. If you have any information on these photos, if you have a theory on the most likely scripture being used on the lych gate, or have any other old photos of the Forest Road Cemetery, please comment below, or contact me at ich@heritagefoundation.ca.

Posted by Dale Jarvis at 9:41 AM No comments: