In the late 1970s an American folklorist, David Taylor, conducted a series of interviews in the Trinity Bay area while researching his Memorial University folklore thesis, "Boatbuilding in Winterton: The Design, Construction and Use of Inshore Fishing Boats in a Newfoundland Community".

In "A Good Boat!" - the first intangible cultural heritage podcast - we present short clips of two of those interviews.

The first, dating from March 22, 1979 is part of Dr. Taylor’s interview with Mr. Lionel Pearcey, who was born December 8, 1918, in Winterton, Trinity Bay, Newfoundland. Mr. Pearcey lived most of his life in Winterton, although he would spend time away from home working in mines, as a fisher, and as a carpenter. In the interview, Mr. Pearcey discusses different types of boats, and explains the difference between a speedboat and a trap boat.

The second clip, recorded in Winterton on August 15, 1979, is part of an interview with Mr. Herbert Harnum. Mr Harnum was born November 30, 1919 in Winterton, where he worked as a fisherman with his family. In this clip, Mr. Harnum describes the qualities of a good boat.

On Monday, November 3, David A. Taylor, from the American Folklife Center at the Library of Congress, will lead a practical, three-hour workshop on how to develop plans for cultural documentation projects.

He will take participants through the process of planning a project, addressing such factors as the identification of its goals, primary focus, financial requirements, and available resources, as well as the selection of documentation equipment and techniques, the use of consent forms, the development of products derived from documentary materials, and the organization and preservation of sound recordings, photographs and other materials generated through field research.

“Proper attention to planning is crucial for the success of any cultural-documentation project,” says Taylor. “As well, if funds are needed to carry out a project, the presence of a clear, detailed and logical plan is very often a crucial factor in determining whether applications for grants are successful.”

The workshop, which is being sponsored by the Heritage Foundation of Newfoundland and Labrador, will be held on Monday, November 3, from 1:00 to 4:00 pm, at The Lantern, 35 Barnes Road, St. John's. Those wishing to participate should contact Dale Jarvis, Intangible Cultural Heritage Development Officer, at 1-888-739-1892 ext2 or email ich@heritagefoundation.ca in order to reserve a spot.

The deadline for registration is October 30th. There is no charge for the workshop.

Dr. David A. Taylor is the head of research and programs at the American Folklife Center at the Library of Congress, in Washington, D.C. His work includes planning and carrying out research projects and public programs concerned with American, ethnic, regional, and occupational cultures; providing technical and reference assistance to cultural institutions and individual researchers; presenting public lectures about American traditional culture; and leading the Center’s research and programs unit. He also serves as the head of acquisitions for the Center's Archive of Folk Culture, the nation's first archive devoted to traditional life and, with over four million items in its collection, one of the largest repositories of its kind in the world. He is the founder and director of the Center's annual field school for cultural documentation, which was launched in 1994. He has directed a number of team-based, multi-disciplinary, field-documentation projects for the Center, including the “Italian-Americans in the West Project,” the “Maine Acadian Cultural Survey,” and the “Working in Paterson Project.” He has served as a member of the United States delegation to the World Intellectual Property Organization's intergovernmental committee on folklore, traditional knowledge and genetic resources. 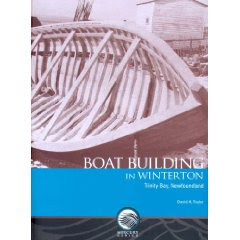 Taylor’s areas of specialization include field-research methodology, material culture, maritime culture, and occupational culture. In addition to his work for the Center, he has carried out independent field research on these topics in Maine, Florida, Newfoundland, and Norway. He is an expert on traditional watercraft, and is proud of the fact that his field research and writing served as the basis for the creation of the award-winning Winterton Boat Building and Community Museum, in Winterton, Trinity Bay, Newfoundland. Outside of his work at the American Folklife Center, Taylor is involved with research and writing about European and American decorative arts of the nineteenth and twentieth centuries.

He holds a B.A., in anthropology, from the University of Maine, and an M.A. and a Ph.D., both in folklore, from Memorial University of Newfoundland.
Posted by Dale Jarvis at 3:40 PM No comments: